Philip Scheirer aka Scherer
Born about 1739 in Württemberg, Germany

Philip Scheirer was a Volga German.

Philipp Scheirer was born in 1742 in Württemberg, Germany. He was a Lutheran, a "Schneider" (cutter) by profession. According to Wikipedia, a Schneider could denote a tailor (someone who cuts fabric) or a woodcutter. The Kulberg Reports refer to him as a tailor.

He can be found on page 168 of the Kulberg Reports along with his first wife, Susanna, with their surname spelled Scherer, with no i in the surname. [1] Together the couple traveled on document number 2420.[1] They had no children.[1] Their group of immigrants departed from Luebeck on the Pink Lev, arriving in Russia on 22 July 1766.[1]

According to the Kulberg Reports, his wife's name was Susanna. Unfortunately there is no age given for her.

In the 1767 census, his wife's name is Elisabeth and she was 28 years old, just 3 years older than her husband. It appears that his first wife, Susanna, did not survive the journey to the Volga River colonies. Because he has a one year old daughter whose mother was his second wife, Susanna must have died early on, when the German immigrants were still in St. Petersburg and later Oranienbaum for the fall and winter. It is unclear how he could marry his second wife, have a child with her, and have that child be a year old, all in the time span of roughly one year. Additionally, the name of his wife in the 1775 census is back to Susanna. This means that the following scenarios should be considered:

In the 1775 census, his wife's name is back to Susanna, and she was 46 years old, 10 years older than her husband. Missing from the 1775 census is his daughter Elisabeth, who would have been 7 or 8 years old, and his wife Elisabeth. It is, in fact, very possible that these two family members did not survive the brutal conditions that the villagers dealt with after their arrival in Grimm.

The two children named in the 1775 census almost certainly belonged to Susanna Scheirer. If there were additional census intake errors involving her name and age in this record, she may have been the same person from the Kulberg Reports and the two Grimm census records taken thus far. If so, then she lost daughter Elisabeth but six years later had the first of two children who survived at least through the 1775 census.

To sum up the wife data for Philipp Scherer/Scheirer:

It would be easy to say that there was a census taker error and she was really only 36 in 1775, but then there is the problem with the different first names. Her name could have been Susanna Elisabeth or Elisabeth Susanna, but it was not typical to change the name one used for herself after she was an adult. Philipp Scherer could have also been married to three different women. The problem with that theory is that none of his children are noted to be from different mothers, as was typical in the 1775 and 1778 censuses.

By the time of the 1798 Grimm census, he was a widower and noted to be an invalid.

The Scheier/Scherer name does not appear at all in the 1834 census. Philipp most likely died before 1816, and his death year was noted in the census that came out that year. Because he had no sons, the name no longer existed in Grimm after his death. His descendants can be traced through his daughters and their children.

I've attached a copy of the above-mentioned possible birth record for research purposes, since some people can't see Ancestry source files without a membership. 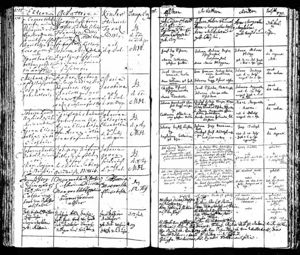