Rock Hudson (born Roy Harold Scherer Jr.; November 17, 1925 – October 2, 1985) was an American actor, generally known for his turns as a leading man during the 1950s and 1960s. Numerous film magazines declared Hudson Star of the Year, Favorite Leading Man, and similar titles. He appeared in nearly 70 films and starred in several television productions during a career that spanned more than four decades. In 1956 he was nominated for an Oscar for his role in Giant. Hudson died from AIDS-related complications in 1985, becoming the first major celebrity to die from an AIDS-related illness. [1]

Roy Harold Scherer was born in Winnetka, Illinois, a wealthy suburb of northern Chicago. He was the only child of Roy Harold Scherer Sr. and Katherine Wood. His father left them in the 1930's, and his mother remarried to Wallace Fitzgerald, who adopted him and changed his name to Roy Fitzgerald.

Roy was interested in acting, but he struggled to memorize lines. Since we were in the midst of World War II, upon graduation, he enlisted in the United States Navy and served in Samar, Philippines as an aircraft mechanic.

After returning from the war in 1946, Roy moved to Los Angeles to pursue an acting career. He worked jobs like driving trucks for a time until talent scout Henry Leroy Willson saw a photo of Scherer in 1947 and took Hudson on as a client. Willson was the one who chose the name of Rock Hudson for him.

His first film was in 1949 and by 1952 he was a leading man in movies. It wasn't until 1954 when he starred in Magnificent Obsession that he had his breakout role. It was also in 1955 that he married Phyllis Gates, who was his agent's secretary. His marriage only lasted a few years until 1958 when they divorced. He also saw a rise in popularity with the 1956 film Giant, and he remained as one of the top ten actors until 1964. He continued working in film through the end of the 60's, but his star was falling, and so he turned to television.

He starred in a number of television shows and movies through the 70's and into the 80's. Due to his poor memory, he had always had to read off cue cards occasionally to finish his parts, however, his speech was also becoming slurred, and it essentially forced him to retire. His last acting role was around April 1985 and he died in October 1985 of AIDS related illnesses.

Is Rock your relative? Please don't go away!

ask our community of genealogists a question.
Sponsored Search by Ancestry.com
DNA
No known carriers of Rock's ancestors' DNA have taken a DNA test. 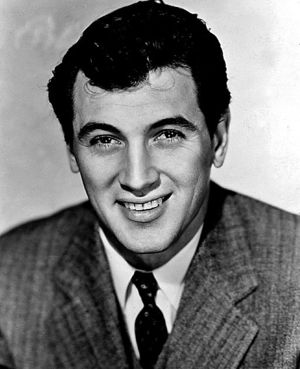 Rock is 24 degrees from Jaki Erdoes, 20 degrees from Wallis Windsor and 21 degrees from Henry VIII of England on our single family tree. Login to find your connection.