Father of German Dictator Adolf Hitler. He was an Austrian Customs Official. Born and christened Alois Schicklgruber in the farming village of Strones, Austria, just north of Vienna, to a 42 year old unwed peasant woman, Maria Anna Schicklgruber. His father was never identified, as Maria would never say who fathered the boy.

Historians have looked at three men as potential fathers of Alois: Johann Georg Hiedler, who acted as Alois' stepfather and was legally declared as the birth father many years after his death; Johann Nepomuk Hiedler, Georg's brother, who raised Alois through his teen years and willed him a considerable amount of his estate; and Leopold Frankenberger's unnamed son, who supposedly fathered Alois when his mother worked in the Jewish Frankenberger house as a maid in Graz, Austria.

While the thought of a Jewish grandfather to Adolf Hitler is ironically intriguing, most historians discount the Frankenberger father theory since all Jews had been expelled from Graz in the 1500s, and were not allowed to return until 1860. Also, there was no evidence that Maria Schicklgruber ever lived in Graz.

The source of the allegation of Alois' Jewish lineage came from a confession by Hans Frank, governor general of German-occupied Poland, written while he was awaiting execution at Nuremberg after World War II. According to Frank's account, while he had been serving as legal adviser to the NSDAP, he was approached by Adolf to confidentially investigate the charge, which had been raised in a letter by Adolf's half-nephew, William Patrick Hitler. Frank then claimed in his confession to have substantiated that Alois was fathered by the nineteen-year-old Jewish son in the purported Frankenberger household.[1]

When Alois was five, Johann Georg Hiedler married Anna, and sent the boy to live with his brother, Johann Nepomuk, who owned a farm in the nearby town of Spital. At age 13, Alois was apprenticed to a shoe cobbler, and worked for him the next five years. In 1855, the Austrian government opened up the civil service to rural people, and Alois joined the semi-military customs service when he was 18. He soon rose to the rank of Oberaufseher, in the town of Linz, and by 1875, was the customs inspector at Braunau.

In late 1800s Europe, one's class was everything. One of the historical versions holds that in 1876, when Georg was eighty-four years old, he formally acknowledged thirty-nine year old Alois as his son.[1] So then in January 1877, Alois, now legitimated, changed his last name from the peasant associated Schicklgruber to the more middle-class Hiedler (misspelled as Hitler). It is generally believed that a clerk changed the spelling from Hiedler to Hitler, since spelling was not standardized at that time. Adolf Hitler's political opponents would later claim that he was really a Schicklgruber, but Adolf was born after his father legally changed his name.

Another version claims that long after Georg's death, Neopomuk managed to get the parish records changed, by bringing three witnesses to testify that they knew Georg had accepted Alois as his son.[1]

In 1880, after Alois had numerous love affairs, including fathering a child out of wedlock, Alois and Anna legally separated; as Catholics, they were not allowed to divorce. Alois soon took up with Franziska Matzelberger, aged 19 and one of the servants, and when Anna died in 1882, Alois married Franziska, who was then pregnant with their second child. After giving birth to a third child with Alois, Franziska died of pneumonia on August 10, 1884, at age 23, and Alois immediately married his second cousin, Klara Pölzl, on January 7, 1885, as she was then expecting. Klara gave birth five months later to Gustav Hitler. Within the next two years, two more children, Ida and Otto, were born.

In 1888, diphtheria struck the family, killing all three of Klara's children, but sparing young Alois Jr and Angela, his children from Franziska. The next year, on April 20, 1889, she gave birth to another son, Adolf. They would have another son, Edmund, two years later. In February 1895, Alois purchased a nine acre farm about 30 miles southwest of Linz, Austria and retired. Here on January 21, 1896, their last child, Paula, was born.

A strong willed, hard drinking man, Alois was an insensitive father and husband, who often spent many hours drinking at the local tavern rather than be with his family. In February 1900, baby Edmund died of measles, and after an argument with his father, Alois Jr, left the family never to return.

On the morning of January 3, 1903, Alois was drinking at the Gasthaus Stiefler, when he collapsed. A doctor was quickly summoned, but Alois had died, probably from pleural hemorrhage, at the age of 65 in Gasthaus Wiesinger, Linz, Upper Austria, Austria-Hungary.[2][3]

Can you add any information on Alois Schicklgruber? Please help grow his WikiTree profile. Everything you see here is a collaborative work-in-progress.

Is Alois your ancestor? Please don't go away!

ask our community of genealogists a question.
Sponsored Search by Ancestry.com
DNA
No known carriers of Alois's DNA have taken a DNA test. 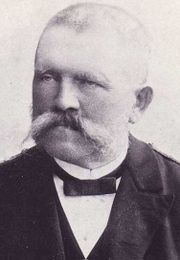