SAN DIEGO (AP) - Walter M. Schirra Jr., one of the original Mercury Seven astronauts and the only man to fly on NASA's Mercury, Gemini and Apollo programs, died Thursday. He was 84.

An aviation buff since childhood, known to fellow astronauts for his colorful personality and independent streak, Schirra became the third American to orbit the Earth in October 1962. He encircled the globe six times in a flight that lasted more than nine hours.

Americans in space before him were Alan Shepard and Virgil "Gus" Grissom, who flew suborbital flights in 1961, and John Glenn and Scott Carpenter, who orbited Earth earlier in 1962. The Soviet Union had beaten the United States into space, putting cosmonaut Yuri Gagarin into orbit in April 1961, weeks before Shepard's suborbital trip.

Schirra returned to space in 1965 as commander of Gemini 6 and guided his two-man capsule toward Gemini 7, already in orbit. On Dec. 15, 1965, the two ships came within a few feet of each other as they shot through space, some 185 miles above the Earth. It was the first rendezvous of two spacecraft in orbit.

His third and final space flight in 1968 inaugurated the Apollo program that the following year put men on the moon.

The former Navy test pilot said he initially had little interest when he heard of NASA's Mercury program. But he grew more intrigued over time and the space agency named him one of the Mercury Seven in April 1959.

Supremely confident, Schirra sailed through rigorous astronaut training with what one reporter called "the ease of preparing for a family picnic."

"He was a practical joker, but he was a fine fellow and a fine aviator," Carpenter recalled Thursday. "He will be sorely missed in our group." Carpenter said he last saw Schirra several months ago and talked to him just a few days ago.

Roger Launius, a space historian at the Smithsonian Institution in Washington, said Schirra "had a personality that was fun and effervescent. He had the gift of gab. He was able to take complex engineering and scientific ideas and translate that to something that was understandable."

Schirra blasted off from Cape Canaveral on Oct. 3, 1962, aboard the Sigma 7 Mercury spacecraft.

"I'm having a ball up here drifting," Schirra said from space.

At the end of his sixth orbit, Schirra piloted the capsule for a perfect splashdown in the Pacific Ocean.

"No one has flown better than you," NASA Administrator James E. Webb told him a few days later.

The only Mercury Seven astronauts who survive him are Glenn and Carpenter.

Although he never walked on the moon, Schirra laid some of the groundwork that made future missions possible.

He liked to stress that NASA never planned to simply send a person to the moon.

"Moon and back," Schirra would point out. "We did confirm a round trip from the very beginning. And 'moonandback' is one word. No hyphens. No commas."

His Gemini mission represented a major step forward in the nation's space race with the Soviet Union, proving that two ships could dock in space. Schirra's Apollo 7 mission in October 1968 restored the nation's confidence in the space program, which had been shaken a year earlier when three astronauts, including Grissom, were killed in a fire on the launch pad.

The Apollo 7 crew shot into space atop a Saturn rocket, a version of which would later carry men to the moon. But Schirra and his two fellow crewmembers were grumpy for most of the 11-day trip. All three developed bad colds that proved to be a major nuisance in weightlessness.

The following year, Schirra resigned from NASA and retired from the Navy with the rank of captain. He had logged 295 hours 154 minutes in space.

A native of Hackensack, New Jersey, Schirra developed an early interest in flight. His father was a fighter pilot during World War I and later barnstormed at county fairs with Schirra's mother, who sometimes stood on the wing of a biplane during flights.

Wally, as he liked to be called, took his first flight with his father at age 13 and already knew how to fly when he left home for the U.S. Naval Academy in Annapolis, Maryland.

After graduation in 1945, Schirra served in the Seventh Fleet and flew 90 combat missions during the Korean War. He was credited with shooting down one Soviet MiG-15 and possibly a second. He received the Distinguished Flying Cross and two Air Medals.

In 1984, he moved to the San Diego suburb of Rancho Santa Fe, serving on corporate boards and as an independent consultant. His favorite craft became the Windchime, a 36-foot (11-meter) sailboat.

Schirra was inducted into the Naval Aviation Hall of Honor in 2000.

Is Wally your relative? Please don't go away!

ask our community of genealogists a question.
Sponsored Search by Ancestry.com
DNA
No known carriers of Wally's ancestors' DNA have taken a DNA test. 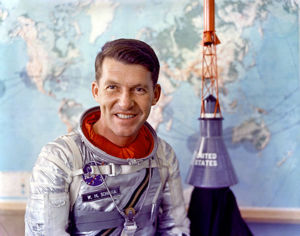