Born Victoria May Schlageter, Victoria Sladen was working as a secretary when she won a scholarship to Trinity School of Music. Treated there as a mezzo-soprano but convinced she was in fact a soprano, she went to Berlin in the mid-1930s to further her studies. Forced back to London by the war, she launched her career in a recital at Wigmore Hall. She moved into variety and pantomime for a time, then in 1942 made her London operatic debut as Giulietta in The Tales of Hoffmann at the Strand Theatre.

She followed that with the title role in La Belle Helene at the same theatre, then auditioned for Sadler's Wells Opera, appearing with them at the New Theatre as Madam Butterfly in 1943. She would sing Butterfly more than 150 times in her career. She appeared at Covent Garden in 1947-48, and also enjoyed success on the concert platform, singing frequently at the Proms, with the Royal Choral Society, and at the Leeds and Norwich festivals. She also sang opera in radio broadcasts with Sir Thomas Beecham.

In 1951 she published her autobiography "Singing My Way" (London, Rockliff), containing advice for the singer considering a career in the field.

In September 1954 she was engaged by the D'Oyly Carte Opera Company as guest artist to sing the title role in their new production of Princess Ida. She appeared in the part until December, and on the recording of Princess Ida issued the following year. It was her only engagement with the D'Oyly Carte and her last appearance on the London Stage.[1]

Is Vicky your ancestor? Please don't go away!

ask our community of genealogists a question.
Sponsored Search by Ancestry.com
DNA
No known carriers of Vicky's ancestors' DNA have taken a DNA test. 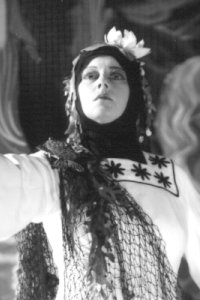