Marie Schmidt, a daughter of Marie Hellmer and Johann Schmidt, was born on 10 Oct 1853 in Schwinge, Boerde Mulsum, Hannover. She married Jürgen Hinrich Siebe in 1875, and they had eight children, listed below.[1] [2] All but three of their children went to America in the late 1800's. Thier son Klaus died in 1914, during WWI. I must have been difficult to have children on opposing sides of the war. Andreas, stayed in Germany, as did his children, The children that went to America, became fruit ranchers in the Suisun Valley, California, after a short stay in San Fransisco. She died on 10 Mar 1938 at the age of 84 in Blumenthal, Kirchspiel Horst, Hannover.[3]

Children of Marie and Hinrich Siebe:[1][2]

ask our community of genealogists a question.
Sponsored Search by Ancestry.com
DNA Connections
It may be possible to confirm family relationships with Marie by comparing test results with other carriers of her mitochondrial DNA. However, there are no known mtDNA test-takers in her direct maternal line. It is likely that these autosomal DNA test-takers will share some percentage of DNA with Marie: 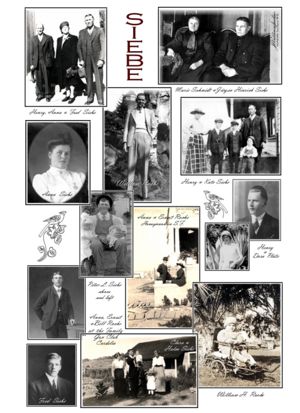