Julia was the wife of the famous Italian Marixst and political prisoner, Antonio Gramsci

In 1922, Antonio Gramsci travelled to Russia as a representative of the new party. Antonio spent a year in Moscow through the summer of 1923. He had been very ill during the first months of his stay, and spent them in and out of a clinic.

While there, he met Julia Schucht, a young violinist whom he married in 1923, and they spent a few months together in Moscow. The couple had two sons,

In 1924 Gramsci live in Rome while his family stayed in Moscow.

Julia came to Italy during 1925 to 1926, but then returned to Moscow, rarely if ever to see her husband again.

On 9 November 1926, the Fascist government enacted a new wave of emergency laws, taking as a pretext an alleged attempt on Mussolini's life several days earlier. The fascist police arrested Gramsci, despite his parliamentary immunity, and brought him to the Roman prison Regina Coeli.

At his trial, Gramsci's prosecutor infamously stated, "For twenty years we must stop this brain from functioning". He received an immediate sentence of five years in confinement on the island of Ustica and the following year he received a sentence of 20 years' imprisonment in Turi, near Bari.

During her husband's imprisonment, Julia spent much of her years in Moscow clinics with a series of nervous illnesses. Her eldest sister, Tatiana, had settled in Italy, and corresponded with Antonio, sending him regular news of Julia and the two children.

Over 11 years in prison, Antonio's health deteriorated, and he died soon after in the clinic on April 27, 1937. While making the funeral arrangements, Julia's sister Tatiana managed to smuggle out the 33 notebooks from Antonio's room, and then via the diplomatic bag to Moscow.

ask our community of genealogists a question.
Sponsored Search by Ancestry.com
DNA
No known carriers of Julia's DNA have taken a DNA test. 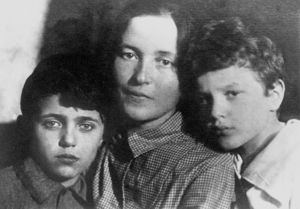