Robert Schumann was a romantic era composer, skilled pianist, and noted music critic of the period. Robert Schumann was born on 8 June 1810 in Zwickau, Germany. By 7 years old he was taking piano lessons from Johann Gottfried Kuntsch. Kuntsch taught piano at the Lyceum of Zwickau and while not an exceptional performer, he was an excellent foundational teacher and gave Robert the start he needed. By the time Robert turned 13, his parents began hosting evenings of musical entertainment at their home, featuring Robert playing the piano as well as conducting other musicians. His father decided to arrange to have Robert be taught by Carl Maria von Weber, a highly skilled pianist and noted composer. Carl had tuberculosis and his health was declining rapidly, but they spent a few short years together which advanced Robert's skills considerably. In 1825 tragedy struck as his sister committed suicide by drowning. By 1826, Robert made several literary attempts at composition, but another tragedy occurred later that year when his father August Schumann died.

In 1827, after a lecture of Jean Paul, Robert begin diary entries. He graduated in 1828, and took journeys to Leipzig, and made acquaintance with Clara Wieck. Also in 1828, was the beginning of his law studies in Leipzig, and being in the same city began piano lessons with Friedrich Wieck. In 1829, Robert took a study year in Heidelberg, where he "attended pianistic performances in society circles" and journeyed to Switzerland and Northern Italy. In Switzerland, Robert Schumann was travelling from Luzer to Bern via Brünig and Interlaken, which his daughter Eugenie remembers: „Yes, Interlaken! Hundred years ago, a young man like many others came with a backpack and walking stick; a young man, who was once supposed to be my father, watched in amazement the mountain giants, the same which I look up to every day and which became my daily companions, almost the only ones.” (It was in 1897, the eldest daughter of Schumann, Marie, purchased a piece of land in Interlaken, where she built a chalet, she lived there until her death on 14. November 1929. Her sister Eugenie Schumann, who had moved into an apartment on the main street of Matten with Marie Fillunger. They spent a lot of time together.)

Schumann heard Paganini, the most celebrated violin virtuoso of his time, preform in Frankfurt am Main. And this along with Clara, inspired him to become a musician and forsake a law career. He took a journey along the Rhine, then returned to Leipzig to resume a continuation of his study with Wieck. By 1831, took up theory lessons with Heinrich Dorn, noted German conductor, composer, teacher, and journalist. The next year was the first public performance of Schumann’s compositions.

Robert has begun to fall in love with Clara Wieck. Then, his mother died in 1836. Clara's father, Friedrich Wieck, forbids his daughter any contact with Schumann but they meet secretly. In 1837, after a one and a half year separation, Robert proposes and has a secret engagement with Clara. Her father rejects Schumann’s courtship and Robert can longer attend concert tours of Clara with Friedrich Wieck. In 1838, Robert goes to Vienna, and continues his musical pursuits and compositions, and in 1839 the plans for editing his magazine in Vienna fail, where he had hoped to migrate. He returns to Leipzig and begins a suit for marriage to Clara and actually the suit goes to trial against Wieck, winning the suit and he an Clara marry 12 Sept. 1840.

Also in 1840, he receives conferral of doctorate at the University of Jena. As if bolstered by his new marriage, Robert composes 138 songs, among them song cycle op. 24 (Heine); song cycle op. 39 (Eichendorff); Dichterliebe (Poet’s love) op. 48 (Heine). He continues the series of piano works with the three sonatas, the "Symphonic Etudes", "Kreisleriana" and "Novellettes". In 1841 wrote symphony in B major op. 38 (Frühlingssinfonie); symphony in D minor in first draft; first movement of piano concerto in A minor (Fantasy). During a 1842 concert tour to Northern Germany in fall, Robert begins to suffer from a “nervous disease”. 1843 brings an appointment to the Leipzig Conservatory. He and Clara are also able to reconcile with her father that year. The next year, January to May, he is on a long concert tour to Russia. And in December the family moves to Dresden.

By 1845 Robert has a severe health crisis. But he and Clara continue to tour to much acclaim. By Mid-February 1854, his had health deteriorated, suffering agonizing ear hallucinations. And by jumping into the Rhine on February 27, Schumann tried to commit suicide. On March 4, he was brought to the private hospital of Dr. Richarz in Endenich, near Bonn, where he died on 29 July 1856, after a painful two and a half years.[1] 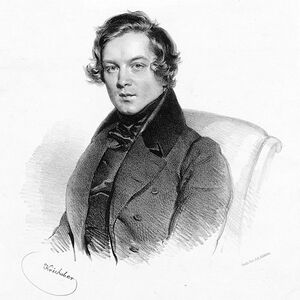