John Henry Scott was born in Angleton, TX in 1949 and is the middle brother of five siblings.

He graduated from Angleton HS in 1967 and played sports (basketball, football) and went to Huston-Tillotson College in Austin, TX for two years until leaving to attend Texas Southern University for 18 months. And then left for a great job...

He worked in the petroleum industry as a quality control inspector at WKM/ACF Industries from 1972-1987. Then, he joined Phillips 66 as an Operator for 23 years until retiring in February 2010.

He enjoys fishing, church, mowing the yard (with a push mower!) and horses and his family and grand/god children.

He was married to Diane from 1997 until his death.

He passed at his home in hospice care after complications from stroke.

John worked for WKM for 15 years and later was employed by Chevron Phillips where he retired after 22 years.

John was a traveling man, he loved helping others and mowing was one of his greatest pastimes. He later met Pastor C. E. Richardson, Jr. who introduced him to fishing.

John Henry was a member of First Missionary Baptist Church. He was a diligent worker at Heart of Christ, Church of God of Prophecy and FMBC of West Columbia. He was ordained as a deacon February 8, 2004 and later accepted his calling into the ministry January 9, 2009.

On Tuesday, October 6, 2020, John Henry passed from this earthly life at his residence. He is preceded in death by his parents and his older brother, Robert A. Scott, Jr.

Is Johnny your relative? Please don't go away!

ask our community of genealogists a question.
Sponsored Search by Ancestry.com
DNA
No known carriers of Johnny's DNA have taken a DNA test. 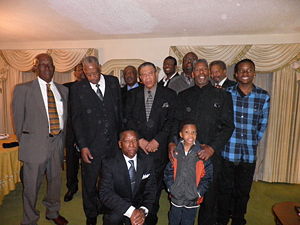