This is the 'Scott of the Antarctic'. Captain Robert Falcon Scott, CVO, RN (6 June 1868 – 29 March 1912) was an English Royal Navy officer and explorer who led two expeditions to the Antarctic regions: the Discovery Expedition, 1901–04, and the ill-fated Terra Nova Expedition, 1910–13.

Scott was born on 6 June 1868, the third child out of six and elder son of John Edward and Hannah (née Cuming) Scott of Stoke Damerel, near Devonport. Although Scott's father was a brewer and magistrate, there were naval and military traditions in the family, Scott's grandfather and four uncles all having served in the army or navy. On 2 September 1908, at the Chapel Royal, Hampton Court Palace, he married Kathleen Bruce.

During the second venture, Scott led a party of five which reached the South Pole on 17 January 1912, only to find that they had been preceded by Roald Amundsen's Norwegian expedition. On their return journey, Scott's party discovered plant fossils, proving Antarctica was once forested and joined to other continents. At a distance of 150 miles from their base camp and 11 miles from the next depot, Scott and his companions died from a combination of exhaustion, starvation and extreme cold. The bodies of Scott and his companions were discovered by a search party on 12 November 1912 and their records retrieved. Scott is presumed to have died on 29 March 1912, or possibly one day later. Following the news of his death, Scott became a celebrated British hero, a status reflected by the many permanent memorials erected across the nation.

We arrived within 11 miles of our old One Ton Camp with fuel for one hot meal and food for two days. For four days we have been unable to leave the tent - the gale howling about us. We are weak, writing is difficult, but for my own sake I do not regret this journey, which has shown that Englishmen can endure hardships, help one another, and meet death with as great a fortitude as ever in the past. We took risks, we knew we took them; things have come out against us, and therefore we have no cause for complaint, but bow to the will of Providence, determined still to do our best to the last. 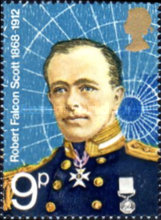 Ros Haywood
I changed the category 'Plymouth' to 'Plymouth, Devon', as this category already exists

Ros, visiting from the Categorization Project

Robert is 23 degrees from Danielle Liard, 21 degrees from Jack London and 15 degrees from Henry VIII of England on our single family tree. Login to find your connection.