Walter Scott is a member of Clan Rutherford. 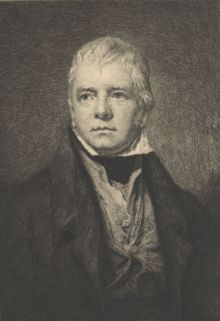 Walter Scott was born in 1771 in the Old Town of Edinburgh his father was a lawyer and his mother was the daughter of a physician he survived polio in his childhood in 1773. He was sent in 1773 to live in the rural Scottish Borders at his grandparents farm at Sandyknowe here he was taught to read by his aunt Jenny, he returned to Edinburgh,in January 1775 and that summer went with his aunt Jenny to take spa treatment at Bath in England.

Sir Walter's mother, who was Miss Anne Rutherford, the daughter of the famous physician, had been better educated than most Scotswomen of her day. Sir Walter, writing of her, after his mother's death, to Lady Louisa Stewart, says, "She had a mind peculiarly well stored with much acquired information and natural talent, and as she was very old, and had an excellent memory, she could draw, without the least exaggeration or affectation, the most striking pictures of the past age. If I have been able to do anything in the way of painting the past times, it is very much from the studies with which she presented me. She connected a long period of time with the present generation, for she remembered, and had often spoken with a person who perfectly recollected the battle of Dunbar and Oliver Cromwell's subsequent entry into Edinburgh." On the day before the stroke of paralysis which carried her off, she had told Mr. and Mrs. Scott of Harden, "with great accuracy, the real story of the Bride of Lammermuir, and pointed out wherein it differed from the novel. She had all the names of the parties, and pointed out (for she was a great genealogist) their connection with existing families."

In October 1779 he began study at the Royal High School of Edinburgh he received private tuition by James Mitchell in arithmetic and writing.After finishing school he was sent to stay for six months with his aunt Jenny in Kelso, attending the local grammar school where he met James and John Ballantyne who later became his business partners and printed his books

Scott's meeting with Blacklock and Burns

Scott began studying classics at the University of Edinburgh in November 1783, at the age of only 12, in March 1786 he began an apprenticeship in his father's office to become a Writer to the Signet, Scott saw Robert Burns at their only meeting Burns had noticed a print illustrating the poem "The Justice of the Peace" and asked who had written the poem, only Scott knew that it was by John Langhorne, and was thanked by Burns.

He returned to the university to study law, first taking classes in Moral Philosophy and Universal History in 1789-90 After completing his studies in law, he became a lawyer in Edinburgh as a lawyer's clerk he made his first visit to the Scottish Highlands he was admitted to the Faculty of Advocates in 1792.

In the middle of the 1790s Walter Scott became interested in German Romanticism, Gothic novels, and Scottish border ballads he collected stories, he recorded what he heard using carvings on twigs, the local story tellers believed that such stories were neither for writing down nor for printing. At the age of 25 he began to write professionally, translating works from German, his first publication were ballads by Gottfried August Bürger in 1796. He then published a three volume set of collected ballads of his adopted home region, The Minstrelsy of the Scottish Border this was the first sign of his interest in Scottish history.

On a trip to the Lake District with old college friends he met Charlotte Genevieve Charpentier (or Carpenter) he proposed three weeks later and they were married on Christmas Eve 1797 in Carlisle Cathedral. They had five children who were baptized by an Episcopalian clergyman. In 1799 he was appointed Sheriff-Depute of the County of Selkirk. He was often referred to as "The Shirra", the Scottish word for Sheriff.

In 1796, Scott's friend James Ballantyne founded a printing press in Kelso, in the Scottish Borders. This is were Scott published his first works and his poetry. In 1805, The Lay of the Last Minstrel after this was publised his career as a writer was established.

Over the next ten years he published many other poems, including the popular The Lady of the Lake, printed in 1810 and set in the Trossachs.In 1809, Scott became a partner with James Ballantyne and his brother after they moved to Edinburgh.

Next Scott started to write stories and novels he wrote five novels over the next five years, each with a Scottish historical setting.Because of his reputation as a poet, he published the novels under the name "Author of Waverley" or as "Tales of..." during this time Scott became known by the nickname "The Wizard of the North".

Recovery of the Crown Jewels

As Walter Scott's became more famous , the Prince Regent (the future George IV) gave Scott permission to search for the long lost Crown Jewels Honours of Scotland, which during the years under Cromwell had been hidden away and had last been used to crown Charles II in 1818, Scott and a small team of military men dug up the Jewels from the depths of Edinburgh Castle a grateful Prince Regent granted Scott the title of baronet.

Walter Scott was ruined financially with the collapse of the Ballantyne printing business in 1825, the company had debts of £130,000. He didn't want to declare himself bankrupt, or to accept any kind of financial support from his many supporters and admirers (including the king himself), he placed his house and income in a trust belonging to his creditors, and determined to write his way out of debt. He kept writing fiction as well as producing a biography of Napoleon Bonaparte, in 1831 he was in poor health. He went on a grand tour of Europe after he returned to Scotland, in September 1832, he died (in unexplained circumstances) at Abbotsford, the home he had designed and had built, near Melrose in the Scottish Borders. His wife, Lady Scott, discharged his debts shortly after his death.

"Although primarily remembered for his extensive literary works and his political engagement, Scott was an advocate, judge and legal administrator by profession, and throughout his career combined his writing and editing work with his daily occupation as Clerk of Session and Sheriff-Depute of Selkirkshire, an office he held until his death in 1832." (wikipedia.com noted in sources)

The town and county of Montrose, Colorado are named after Scott's Novel A Legend of Montrose 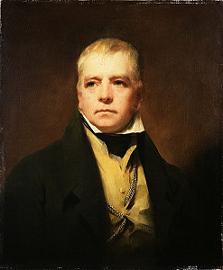 Leave a message for others who see this profile.
There are no comments yet.
Login to post a comment.
Alan Hepburn
Greetings,

I am researching a John SCOTT born about 1822 in Edinburgh (I believe) and married to an Elizabeth STEEL, 17 Aug 1857 in Leith. I have been told by a couple of family members that their family lore says that this John SCOTT was either a nephew or great-nephew of Sir Walter SCOTT but I have found nothing to confirm that. Can anybody help me to find a connection?

Shan (Ward) Dawson
Hi, my great Grandmother was a Scott, and I believe the Walter Scott 1720 and James 1729 on your tree are only 9yrs apart. Yet one is the father. Is this a mistake, as my Family tree shows different dates. Thank you ~Shanan
posted Dec 28, 2016 by Shan (Ward) Dawson

Bob Fields
Scott-15243 and Scott-9227 appear to represent the same person because: Same birth and death dates and locations. Should have checked for duplicates before importing. Thanks.
posted Aug 15, 2015 by Bob Fields

Jillaine Smith
Per the g2g discussion linked to above, there is inadequate proof that Sir John Scott and Anne Pympe had a son named Walter
posted Dec 18, 2013 by Jillaine Smith

Walter is 22 degrees from Mary McCauley, 25 degrees from B. W. J. Molier and 13 degrees from Henry VIII of England on our single family tree. Login to find your connection.