Wilbur Scoville is Notable.
Wilbur Scoville was an American pharmacist best known for his creation of the "Scoville Organoleptic Test", now standardized as the Scoville scale. He devised the test and scale in 1912 while working at the Parke-Davis pharmaceutical company to measure pungency, "spiciness" or "heat", of various chili peppers. In the Scoville Scale (see illustration) for rating the hotness of chili peppers, the hotness is related to the concentration of the compound capsaicin.[1][2][3]

Wilbur Lincoln Scoville was born in 1865 in Bridgeport, Connecticut.[3][4] His parents were Lemuel and Augusta Scoville.[5][6][7] In 1880, Wilbur started his pursuit of pharmaceutical practice, apprenticing at a summer job at the local Toucey's Drug Store.[3] Growing up in Bridgeport, Wilbur benefitted from a prosperous hometown, complete with city library and hospital, part of which was due to the generosity of her residents, notably PT Barnum.[3] The Scoville family valued education and made sure their children received a good one. Wilbur went to school in the Bridgeport Consolidated School District (his only notable mention there was perfect attendance one year in high school and he never graduated). Once he left high school at 16, he started working full-time for Edward Toucey and continued to do so for six years, until he was prepared to attend Massachusetts College of Pharmacy, where he was later a professor, from 1892 to 1904.[2][6][3] Notable about the MCP at the time was that it set a schedule so apprentices could still work for their masters while attending, offering afternoon and evening classes, and it was common for those masters to help pay for their apprentice's educations. It is surmised, due to maternal relatives being in the area, Wilbur likely lived with them while attending classes to help reduce the cost of his attendance. Before the end of his first year of attendance there (1888), Wilbur had taken and passed the licensure exam. This was enough for him to begin his own practice, but instead, he continued his studies, graduating in 1889 with a Ph.D. in Pharmacy.[3]

Straight out of school with his new Ph.D., Wilbur was the first chemist hired at the newly established E.L. Patch Pharmaceutical Company. Patch was well-known in the region and got his pick of new recruits from the Massachusetts College of Pharmacy. Both men worked with each other at the MCP, as well. Soon, Wilbur has published studies in pharmaceutical journals, working his own research, and respected member of the American Pharmaceutical Association. Not only was his respect growing in the pharma industry, but also in the world of chemistry where he was later a member of the American Chemical Society. Little survives to indicate the kind of professor Wilbur was, but some records seem to indicate he liked to give his students hands-on, real-life exposure to the world of pharmacy, regularly using field trips to major labs around the region. He also understood the difficulty some people had in reaching a college to complete courses and so co-authored texts for at-home studies in pharmacology. In teaching and researching, Wilbur had an affinity for keeping things basic, especially in the beginning, and slowly moving towards the more precise and difficult parts of whatever he was explaining. This also meant he often focused on using once's senses to learn about whatever the subject was. One, in particular, was his writing on compounding, where he used taste as an especial tool. Not surprisingly, this would lead to his work on the piquancy of peppers. The text Wilbur wrote on compounding would end up being the preferred text for educating on the subject at schools around the country for many years, at least until the 1960s. Before leaving academia, Wilbur worked to compile the various programs available around the country at colleges and schools for those pursuing working in pharmaceuticals. What he found was a maze of different program lengths, focuses, and availability. His report led to standardization in pharmacy programs and requirements for practice.[3]

In 1904, Wilbur left his work for the MCP and started running an analytic chemistry department for Jaynes drug stores, a prominent chain in the Boston area. He worked there specializing in their flavoring agents, until the time at which Jaynes merged with Ryker in 1907. He accepted an offer at that time to work for Parke-Davis.[3]

Wilbur moved his family to Detroit, Michigan as he moved his work to Parke-Davis, which was founded there.[11][13][14] He was a research chemist there from 1907 to 1924, and the head of the Analytical Department from 1924 to 1934.[2] Wilbur was given "carte blanche" to go through the elixirs the company had and improve on their taste, appearance, stability, and value, among other things. Wilbur was considered the leading expert on pharmaceutical elegance, which was the study of flavors, scents, and appearance of drugs and body products, and this was reflected in his book, Extracts, and Perfumes.[3]

Two of the most important posts a pharmacist could hold during Wilbur's era was being on the revision committees of either the United States Pharmacopeia or the National Formulary. Wilbur held posts on both. The groups helped establish best practices and to weed out formulations which were no longer deemed acceptable.[3]

While working at Parke-Davis on their elixirs, Wilbur developed what was the first practical scale for measuring the heat in peppers, formally known as pepper piquancy. Peppers, specifically cayenne, were used frequently in pharmaceutical preparations. He based his scale on ratios, diluting an extracted drop of juice from a pepper in a drop of water. He increased the water, and the last point at which the spiciness of a pepper can still be sensed was its spot on the scale. If a pepper measured 500,000 on the scale, it meant that one drop of the juice from that pepper in 500,000 drops of water was could still be felt on the tongue. The process has since been refined and is now measured using tools to actually gauge how much capsaicin is in a pepper, but the measurement still remains named after him and his original idea. Wilbur retired from Parke-Davis in 1934.[3]

Though more standardized methods are used in the modern era, Scoville's work is still recognized as setting that standard. He received the American Pharmaceutical Association's highest honor for research, and Ebert Prize, in 1922. Then, in 1929, he received there all-around highest honor, the Remington Medal. In addition, he is honored as the namesake of the Scovie Awards, the official awards of the National Fiery Foods and Barbecue Show.[3]

Lillie and Wilbur retired to Florida, not far from Wilbur's brother.[15] Wilbur passed March 10, 1942, in Gainesville, Florida after a lingering illness.[16]

Is Wilbur your ancestor? Please don't go away!

ask our community of genealogists a question.
Sponsored Search by Ancestry.com
DNA
No known carriers of Wilbur's DNA have taken a DNA test. 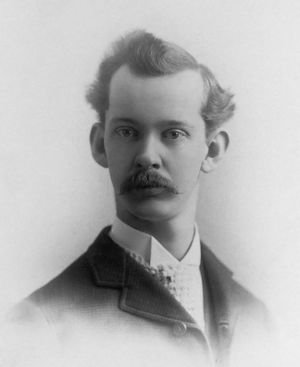 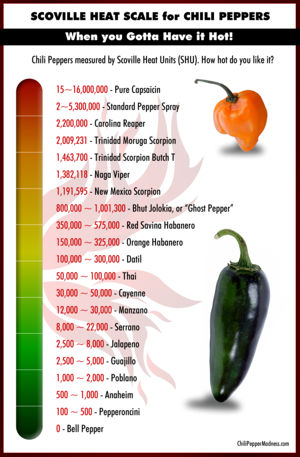 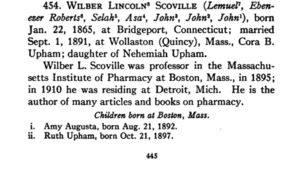 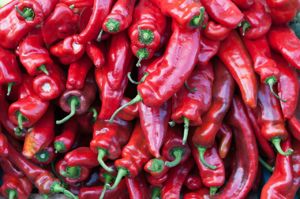