Joseph was born April 15, 1841 to Octavius Augustus Seagram and Amelia (Stiles) Seagram, who had recently immigrated to Cambridge, Ontario from Wiltshire, England in 1837.

Joseph and brother, Edward, were orphaned in their teens, and lived at Dr. Tassie's boarding school in Galt for six years. Joseph then spent a year at business college in Buffalo, New York, before returning to Canada, where he worked as a bookkeeper and manager at various mills in Galt and Stratford. In 1864, he went to work for William Hespeler at the Granite Mills in Waterloo, which was to be the foundation of his career as a distiller.

While he was managing a flour mill in Waterloo, Ontario, he learned about the distilling process. This was a small side-venture to the company's flour business, using the extra grain stocks to make alcoholic beverages. In 1869, he bought out one of the firm's three partners, then in 1883 became the 100% owner and renamed it Seagram. Making whisky became the major role of the business and he built it into one of the country's most successful. His 1907 creation, Seagram's VO whisky, became the largest-selling Canadian whisky in the world.

Joseph had a passion for horse racing and advanced horse racing in Canada. As a wealthy man, he imported high-quality breeding stock from England and the US. Horses from the Seagram stables were Queen's Plate winners for eight consecutive years, beginning in 1891. All totaled, his horses achieved fifteen Plate wins in all. His son, Edward Frowde, and grandson, Joseph Edward Frowde, shared his enthusiasm and continued the family tradition into the 1970's.

Throughout his life, Joseph Emm Seagram was known in "social, political and business circles in Waterloo." He was politically active and he served on Waterloo Town Council from 1879-1886 and was Conservative Member of Parliament for Waterloo North from 1896-1908. He founded the Globe Furniture Company, was a founder of the Waterloo County Loan and Saving Co., and donated land for the Kitchener-Waterloo Hospital. His descendants continued the tradition of local participation in business and civic life. The family also had a keen interest in and support of sports, ranging from golf to football to cycling. 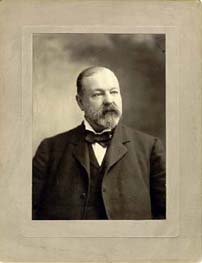 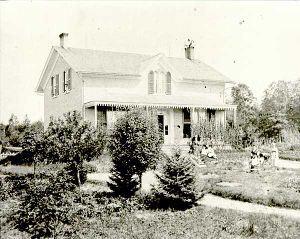 "Bratton House" on Willow St. in Waterloo, home of Joseph Emm Seagram. It was the largest house in the twin cities and had 65 rooms. The home later served as the K-W Orphanage. 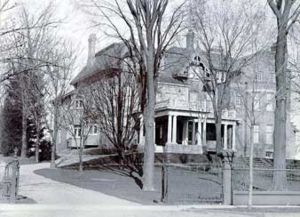