He was born to Francesco Sforza, a popular condottiero and ally of Cosimo de' Medici who had gained the dukedom of Milan, and Bianca Maria Visconti. He married into the Gonzaga family, and on the death of his wife Dorotea, married Bona di Savoia, his cousin.

Gian Galeazzo was born in Fermo, near the family's castle of Girifalco, the first son of Francesco Sforza and Bianca Maria Visconti. At the death of his father (March 8, 1466), Gian Galeazzo was in France at the head of a militaryexpedition to help King Louis XI of France against Charles I of Burgundy. Called back home by his mother, Galeazzo returned to Italy by an adventurous trip under a false name, as he had to pass by the territories of the family enemy, the Duke of Savoy, who made an unsuccessful attempt on his life. He entered Milan on March 20, acclaimed by the populace.

In his first years Galeazzo and his mother ruled jointly, but later his ruthless character pushed him to oust Bianca Maria from Milan.

Sforza was famous as a patron of music. Under his direction, financial backing and encouragement, his chapel grew into one of the most famous and historically significant musical ensembles in Europe. Composers from the north, especially the Franco-Flemish composers from the present-day Low Countries, came to sing in his chapel and write masses, motets and secular music for him. Some of the figures associated with the Sforza chapel include Alexander Agricola, Johannes Martini, Loyset Compère, and Gaspar van Weerbeke. Most of the singers at the chapel fled after Galeazzo's murder, however, and took positions elsewhere; soon there was a rise in musical standards in other cities, such as Ferrara, as a result.

Despite his love of music, Sforza is also known to have had a cruel streak. He was a notorious womanizer who often passed his women on to his courtiers once he was tired of them. He once had a poacher executed by forcing him to swallow an entire hare (with fur intact), had another man nailed alive to his coffin, and a priest who had predicted a short reign was punished by being starved to death. This made him many enemies in Milan. It was also said of Sforza that he had raped the wives and daughters of numerous Milanese nobles; that he took sadistic pleasure in devising tortures for men who had offended him and that he enjoyed in pulling apart the limbs of his enemies with his own hands.

Lampugnani, descended from Milanese nobility is recognized as the leader of the conspiracy, his motives based primarily on a land dispute, in which Galeazzo failed to intervene in a matter which saw the Lampugnani family lose considerable properties. Visconti and Olgiati also bore the duke enmity - Olgiati was a Republican idealist, whereas Visconti believed Sforza to have taken his sister's virginity.

After carefully studying Sforza's movements, the conspirators made their move on the day after Christmas, 1476, the official day of Santo Stefano, the namesake of the church where the deed was to be committed. Supported by about thirty friends, the three men waited in the church for the duke to arrive for mass. When he arrived, Lampugnani knelt before him, and after some words were exchanged, rose suddenly, stabbing him in the groin and breast. Olgiati andVisconti soon joined in, as did a servant of Lampugnani's.

Sforza was dead within a matter of seconds, and all the assassins quickly escaped the ensuing mayhem, save for Lampugnani, who became entangled in some of the church's cloth and was killed. His body soon fell into the hands of a mob, which dragged it through the streets, slashing and beating at it and in the end, hanging it upside-down outside his house. The beheaded corpse was cut down the next day and, in an act of symbolism, the "sinning" right hand wasremoved, burnt and put on display.

Aftermath of the assassination

Despite the initial public reaction, the government brought swift justice, soon encouraged by the public as well. The conspirators had given little thought as to the repercussions of their crime, and were apprehended within days. Visconti and Olgiati were soon found and executed, as was the servant of Lampugnani who had participated in the slaying, in a public ceremony which culminated in their corpses being displayed as warnings to others.

Evidence from the conspirators' confessions indicated that the assassins had been encouraged by the humanist Cola Montano, who had left Milan some months before, and who bore malice against the duke for a public whipping some years before. Olgiati also uttered the famous words, while being tortured, "Mora acerba, fama perpetua, stabit vetus memoria facti" (Death is bitter, but glory is eternal, the memory of my deed will endure).[1]

Similar elements indicate that this assassination was likely influential in the Pazzi Conspiracy, a subsequent attempt to dethrone the Medici family in Florence and to replace them with Girolamo Riario.

With his second wife, Bona of Savoy, Sforza had four children:

With Lucrezia Landriani, he had one illegitimate daughter: 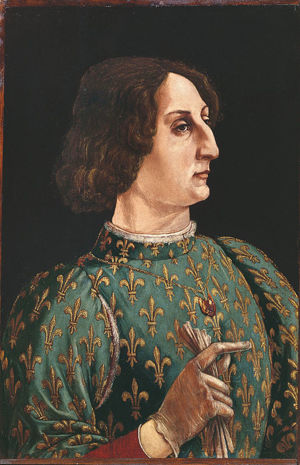