William "The Bard of Avon" Shakespeare
Born about 23 Apr 1564 in Stratford-upon-Avon, Warwickshire, England

William Shakespeare was an English poet and playwright who is widely believed to have been born on or about 23 April 1564. He is known for his many contributions to literature including the 154 sonnets and numerous highly popular plays such as "Romeo and Juliet" and "Hamlet". Many consider Shakespeare to be the best English language writer of all time. His works are still very influential and are studied in schools all over the world.

William Shakespeare, son of John Shakespeare and his wife, Mary Arden, was born at Stratford-upon-Avon in Warwickshire in 1564 and was baptised on 26 April.[1] He is believed to have been educated at King's New School in the town though no evidence exists. So little has been recorded about his early years that speculation still abounds.

In 1582 aged 18 he married Anne Hathaway aged 26, daughter of Richard Hathaway of Shottery, by license dated 27 November 1582 after three lots of banns had been published on the same day. There was reason for the haste for Anne was about 3 months pregnant. Their daughter, Susanna, was baptised 26 May 1583. Twins, Hamnet and Judith, who were named after two of Shakespeare’s lifelong friends, were born in 1585. Very little information is available about Shakespeare’s life for the seven years 1585 to 1592[2] leading to yet more scholarly speculation.

In 1592, Robert Greene referred to Shakespeare as an ‘upstart crow’ which is the first evidence of the playwright’s rise in London theater. By this time it is thought that he had already written Taming of the Shrew, The Comedy of Errors and parts of Henry VI. He was one of the original members of the company of players, the Lord Chamberlain's Men, founded by Henry Carey, 1st Baron Hunsdon in 1594.[3] Although he took small parts, Shakespeare's forte was writing: during this time, he produced a wide range of notable plays, including A Midsummer Night’s Dream and Romeo and Juliet, sonnets and narrative poems. In 1599 the company opened The Globe theatre on land owned by Nicholas Brend in Southwark.[4]

The death of Queen Elizabeth on 24 March 1603 had little effect on the Company's fortunes. The new King, James I, became their patron and they continued under the name The King's Men.

Shakespeare died at Stratford on 23 April 1616 from an undocumented illness and was buried at Holy Trinity, on the 25th.[5] By his will, overseen by Thomas Russell,[6] he left Anne only his "second best bed".[7] 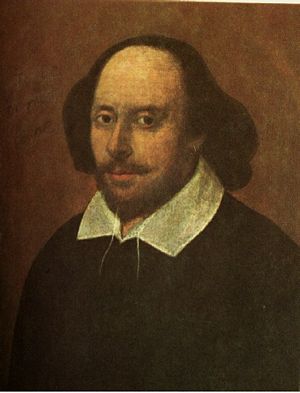 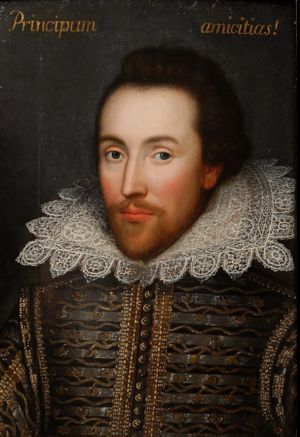 Michele (Britton) Camera
B) circa 1676, while speaking of Shakespeare's death 60 years in the past, protestant clergyman Richard Davis said the writer "died as a papist".

4. Shakespeare's daughter, Susanna, had refused to take the oath of supremacy which affirmed the English monarch as the head of the church. That refusal was a position held by many Catholics and one that landed Susanna in the court of the Recusant.

5. In 1613 Shakespeare purchased the Blackfriars Gatehouse in London and leased it out as a safehouse for Catholics fugitives and priests.

6. Brother of the Gatehouse tenent went to Rome to study for the priesthoid after such activity was banned in England.

1. Shakespeare's writings "clearly point to somebody who was not just saturated in Catholicism, but occasionally argued for it," said Claire Asquith, a scholar and author of "Shadowplay: The Hidden Beliefs and Coded Politics of William Shakespeare.

Asquith continues on by discussing Hamlet and how it portrays a Catholic's point of view.

2. "Author of 'Through Shakespeare's Eyes: Seeing Catholic Presence in the Plays', scholar Joseph Pearce takes this conflict a step further by saying the play is speaking out against England's persecution of Catholic priests. "The play illustrates the venting of Shakespeare's spleen against the spy network of England which had led to many a Catholic priest being arrested, tortured and martyred," said Pearce, who is director of the Center for Faith and Culture in Nashville, Tennessee and author of three books on Shakespeare."

3. Contemporary instances of Shakespeare having been recognized as Catholic:

A) In 1611, John Speed, a protestant & government propagandist accused Shakespeare if being "a Papist" after Shakespeare wrote a parody about the protestant martyr, John Oldcastle.

"While scholars agree that Shakespeare's writings indicate sympathies for the Catholic cause, definative proof from his life that he was a covert Catholic is harder to come by. in fact, Asquith said, there is even resistance among the academic community regarding his possible relationship with the Catholic Church, despite the vast evidence from the writings of Shakespeare and his contemporaries."

Vincent Piazza
Although Shakespeare is best known for his works in literature, many people also know him for the controversy his name brings up. There are many different views on different aspects of Shakespeare's life including his religious affiliations, whether or not he actually wrote his plays or stole them from someone else, his sexual orientation, among many other things.

This whole thought I think should be deleted from the narrative because it is only modern speculation. Too little is known about Shakespeare to support this as a fact. It would also eliminate the dangling preposition phrase "brings up".

Vincent Piazza
someone else, his sexual orientation, among many other things.

there should be an "and" in this sentence or a semi-colon, I would go with an "and" before "his sexual orientation"

also, would it be amongst (I'm not an expert with that word but among doesn't sound right in this sentence)

Vincent Piazza
...to be the best English language writers of all time.

either "one of" (or something similar) is missing from this sentence or writers is singular.

William is 20 degrees from Peter Roberts, 13 degrees from Emma Smith and 9 degrees from Henry VIII of England on our single family tree. Login to find your connection.