John Sharpe was born on Sep 22, 1744 in Cecil County, Maryland. His parents were Thomas Sharpe, Jr. and Elizabeth Gillespie. He married Lillie McCoy. He died on Jun 11, 1812 in Iredell County, North Carolina. [1]

John and Lillie moved to Rowan County (became Iredell County in 1788), North Carolina before the Revolutionary War. He served in the Rowan County Regiment, North Carolina Militia during the war, along with his brothers. His home was on a 400 acre plantation north of the South Yadkin River on the Island Ford-Shallow Ford Road in what became Sharpesburg Township. He left his home to his son, David Sharpe. His son, James McCoy Sharpe, received the lower end of the plantation with a home just to the east of David's home.

John Sharpe is buried at Snow Creek Methodist Church Cemetery in Harmony and his wife, Lillie, who died in 1818, is buried in an unmarked grave by his side.[3]

ask our community of genealogists a question.
Sponsored Search by Ancestry.com
DNA Connections
It may be possible to confirm family relationships with John by comparing test results with other carriers of his Y-chromosome or his mother's mitochondrial DNA. Y-chromosome DNA test-takers in his direct paternal line on WikiTree: It is likely that these autosomal DNA test-takers will share DNA with John: 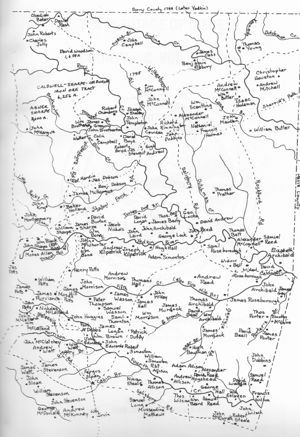 John is 21 degrees from Danielle Liard, 17 degrees from Jack London and 10 degrees from Henry VIII of England on our single family tree. Login to find your connection.