Joseph Sharpe obtained the following State Land Grants in Rowan County before Iredell County was created in 1788 and in Iredell County after 1788[2]:

[fn p. 16] We Hugh Andrews, Andrew Carson and William Falls residing in Iredell County North Carolina hereby certify that we are well acquainted with Joseph Sharpe who has sworn to & subscribed the above declaration, that we believe him to be 80 years of age. That he is reputed & believed in the neighborhood where he resides to have been a soldier of the Revolution & that we concur in that opinion. The said Hugh Andrews further states that he was in service when & where the battle of Alamance, herein mentioned, took place & that he believes the statement of Joseph Sharpe of his services there is true & correct.

Sworn to & subscribed the day & year above.

[NC State Comptrollers Dept. certified the disbursements to a Capt. Joseph Sharp[sic] who served, among others, under Pickens]

[fn p. 7] State of North Carolina, Iredell County This day personally appeared Joseph Sharpe before me the Subscribing justice of the peace in and for the County aforesaid, and being Sworn in due form of law doth on his oath make the following additional declaration in order to obtain the benefit of the provision made by the act of Congress passed the 7th of June 1832. He Deposeth and saith that by reason of old age and the consequent loss of memory he cannot swear positively as to the precise length of his service but to the best of his recollection he served not less than the periods mentioned below and in the following grades: In his first tour as mentioned in his declaration he Served a volunteer & a private in the foot (see his declaration) 6 months Second tour he was also a volunteer and a private in the foot 4 Third tour he was a private & volunteer in the foot fore 13.0 Fourth tour a volunteer lieutenant in the horse 15 [days] Fifth tour a volunteer Captain in the horse 10 [days] Sixth tour a volunteer as a private in the horse 3.00 [mos] Seventh tour a volunteer Captain in the horse 15 [days] Eighth tour a Captain in the horse 15 [days] Ninth tour a Captain in the horse 48 [days] 19.18 And for such Service he claims a pension Pri: 13 mos. Lieut. ½ mo pri 3 mo Capt. 1/3 do 2.18 2.28 He was born in the year 1753 Cecil County Maryland He has a record in a Bible taken from a record in his father's Bible. He was living when he was called into Service in what is now Iredell what was then Rowan County and has lived there ever since & now lives there. He was always a volunteer. He has Stated in his declaration the name of his officers. He also became acquainted with Colonel Washington of the horse. He has no recollection of ever receiving any written discharge. He refers to Andrew Carson, Hugh Andrews and William Falls. (Note: William Falls Pension S6834 and Andrew Carson PensionS8173)

There is a Joseph Sharpe, age 77, listed as a Revolutionary War Pensioner and Head of Household in the Iredell County, North Carolina Census of 1840.

Joseph Sharpe does not appear on the Map of the Fourth Creek Congregation that William Sharpe made in 1773.[4]

ask our community of genealogists a question.
Sponsored Search by Ancestry.com
DNA Connections
It may be possible to confirm family relationships with Joseph by comparing test results with other carriers of his Y-chromosome or his mother's mitochondrial DNA. Y-chromosome DNA test-takers in his direct paternal line on WikiTree: It is likely that these autosomal DNA test-takers will share DNA with Joseph: 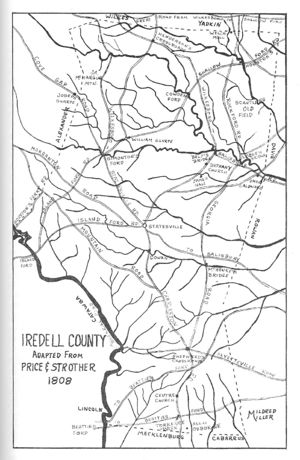 Joseph is 21 degrees from Danielle Liard, 16 degrees from Jack London and 10 degrees from Henry VIII of England on our single family tree. Login to find your connection.