Mary, the daughter of Judith (____) Shatswell by an unnamed father, was born about 1605 in Sibbertoft, Northamptonshire, England.[1]

By 1634, when her husband was granted land in Ipswich, Massachusetts.[2]

Dated: 1 APR 1693 Newbury, Essex County, Massachusetts.
Recorded: 1 June 1696,
Note: The will of Mary Emery which is stated to have started in a good hand and is finished in an illegible one:

In the name of God Amen. I Mary Emery of newbury in the County of Essex in the province of the Massachusetts Bay in New England, (Widow & Relict of John Emery Late of of newbury deceased) Being weake of Body but of a desposg mind Do make this as my Last will & testament as followeth viz Imprm I give [change of writing] too my Son Jonathan Emrye I give ten pnds of that my Husband gave me in his last will and testament upon that god will we - I Doe br to him my Son Jonothan Emrye- I give alsoe that thirtye shilinges my Son bord of me. To Israles far [four] Daughtrs twentie shilinges. I give also too John Websters Son Isrell ten shilinges- I give too my Daughtr Simon my Serge Gown- I give [sentence illegible] I give alsoe to Abigell Mrell one white handchytr. I give also too Johanna Mythe a blck Silke hode. I give to my Dafter Ebenezr the rest of my wearinge cloths. I Doe also [ill.] my son Steven too paye Hanah Emeson twentye Shilinges - and to Abigell Mrell twentie shilnges and the rest I give my Son Steven webster. Apryl the Fist Day 1693. Sind seled and Delivd in the prsce of us James Gulmar, Elisabeth Her X Mark Briket, Mary Her X Mark Emery. [7] 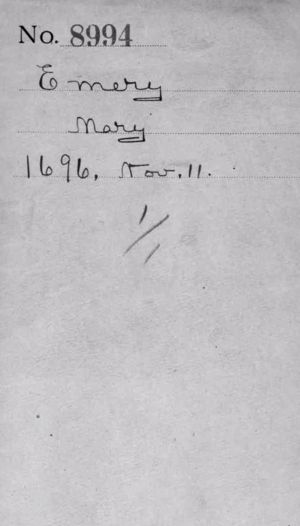 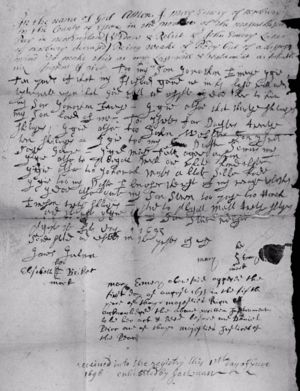 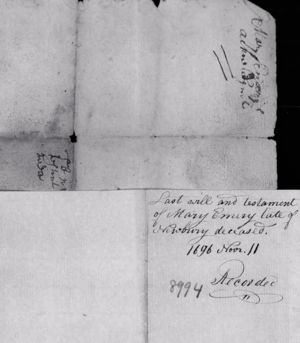 Leave a message for others who see this profile.
There are no comments yet.
Login to post a comment.
Clark Bagnall
Mary's mother should be Judith (Unknown) Shatswell (Unknown-82081) rather than [mother unknown]. The MacDonald article in the Register makes it clear that Mary was Judith's daughter.
posted Nov 15, 2020 by Clark Bagnall

David Bailey
There seems no basis for children Thomas Emery and Eleanor Emery, doesn't jive with the text, probably should be removed.
posted Mar 07, 2020 by David Bailey

Anne B
No Thomas listed as child by Anderson. NO Thomas Emery listed by Anderson.
posted Nov 09, 2019 by Anne B

Anne B
The parents on this profile and associated profiles have some problems. Please bear with as I communicate with managers. I will get back to this.
posted Nov 06, 2019 by Anne B