Percy was born on the 4th August 1792 the eldest legitimate son of Sir Timothy Shelley — a Whig Member of Parliament for Horsham from 1790–92 and for Shoreham from 1806–12, and his wife Elizabeth (Pilford) Shelley, a Sussex landowner. Percy was born at Field Place, Broadbridge Heath, near Horsham, West Sussex, England and was christened on the 7th September 1792 at St. Margaret, Warnham, Sussex.[1]

Percy Shelley is best known as one of the major English Romantic poets, and is regarded by critics as one of the finest poets in the English language. He was a key member of a close circle of visionary poets and writers that included Lord Byron; Leigh Hunt; Thomas Love Peacock; and his own second wife, Mary. His "poems display a similar heightened awareness to Wordsworth's and the same awareness of the spirit-force pervading the world".[2]

His love of nature was evident not only in his poems, as described by Sydney Waterlow in the book titled "Shelley: The Poet of Rebellion, Nature, and Love", but also in his long walks when staying at Field Place before he went to Oxford.[3]

In 1810 Percy attended University College, Oxford, and was expelled the following year for, as the College Register of the time put it, “contumaciously refusing to answer questions proposed to [him], and for also repeatedly declining to disavow a publication entitled The Necessity of Atheism”. At the time, the College thought it had washed its hands of a troublesome student; it only realised later that it had expelled one of England’s greatest romantic poets.[4]

Percy eloped with Harriet Westbrook, a minor, and was married on the 28th August 1811 in Edinburgh, Scotland. She was the daughter of John Westbrook who pretended to disapprove but secretly encouraged the elopement. An account of the elopement was published in The Hartlepool Northern Evening Mail being a letter written by Percy's cousin Charles Groves to Lady Shelley.[5][6][7]

Percy did not find his wife to be intellectually stimulating. On the 28th July 1814, he abandoned Harriet, now pregnant with their son Charles.[9]

In 1816 Percy, a widower as his wife Harriet had died earlier in the year, married Mary Wollstonecraft Godwin, a minor from Bath, Somerset, on the 30th December 1816 at St. Mildred, Bread Street, London. Her father, William Godwin, was a witness as was an M. J. Godwin.[10] [11]

On the 8th July 1822, less than a month before his 30th birthday, Percy drowned in a sudden storm on the Gulf of Spezia while returning from Leghorn (Livorno) to Lerici in his sailing boat, the Don Juan. He was buried in Christchurch Priory Churchyard, Dorset. [12]

Custody of Percy's children from his first marriage

Please refer to Harriet (Westbrook) Shelley's profile for the discussion regarding the custodianship of Eliza Ianthe Shelley and Charles Bysshe Shelley.

Is Percy your ancestor? Please don't go away!

ask our community of genealogists a question.
Sponsored Search by Ancestry.com
DNA
No known carriers of Percy's DNA have taken a DNA test. 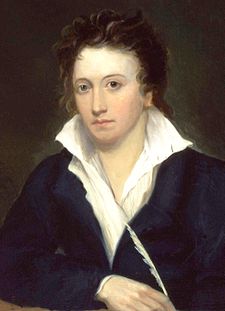 Gillian Thomas
Hello Aidan, the England Project would like to take on the management of this project protected profile, as per About Project Protection. Please contact me if you would like to discuss, otherwise I'll proceed in a week or so. Thank you.
posted Apr 05, 2018 by Gillian Thomas