Ralph Shelton was the son of John Shelton and Mary Parker. He married Elizabeth Barrow, daughter of Thomas Barrow and Mary Bures.

The eldest son and heir. At his father’s death, he had livery of his inheritance including Shelton, Snoring, Carrow and others and 8 Jun 1559 he was given license to take possession. He was High Sheriff of Norfolk in 1570. During his term as High Sheriff, he developed a close relationship with John Parkhurst, Bishop of Norwich. The Bishop held Ralph in great esteem as seen in a series of letters published in the Norfolk Record Society and Ralph proved to be a great ally during the prosecution of George Thimelthorpe, one of the county officers accused of corruption. Sometime after 1558, Ralph sold the Suffolk manor of Mildren which had been in his family since 1480 to Robert Thorpe. 31 May 1561, he paid 5 pounds in alms for William Godsalve, Esq., who had died very suddenly. 8 May 1566, he was made commissioner of the sewers with several other Norfolk notables. In 1573, he presented William Mann as the rector of Hardwick church and in 1576 presented Reginald Nuthall as rector to the same church. He was knighted at Norwich by Queen Elizabeth 22 Aug 1578 along with Thomas Knevett, Edward Clere, Roger Wodehouse, Henry Wodehouse. 19 Jun 1573, Ralph was made a justice of the peace for Norfolk and appointed again 23 Jun 1574. 20 Mar 1574 Ralph was commissioned with Edward Flowerdew and Roger Wodehouse to inquire into the death of Edward Cusshin and 17 Sep of the same year, served in the same capacity upon the death of Stephen Burrell. Ralph married 13 Sep 1551 Mary, daughter of Sir William Wodehouse of Waxham. In the Shelton family church at the manor, there are ten panels on the left side of the altar, which record the marriage of Mary Wodehouse and Ralph Shelton, as well as the birth of their children Margaret, Thomas, John, Ralphe, and Edward. She was buried at Shelton 6 Jul 1558. He married secondly 16 Oct 1570 at Shelton to Anne, daughter of Thomas Barrow, Esq of Barningham co Suffolk by Mary daughter and coheir of Henry Bures at Acton co Suffolk. Sir Ralph died 3 Oct 1580 and was buried at Shelton on the north side of the altar 6 Oct 1580. His IPM was held 25 Apr 1582 and another 28 Apr 1584 where he was found to hold Carrow in Norwich which he had prior to his death settled on Thomas Barrow with remainder to Anne and his children by her, as well as being seized of Shelton, Snoring Magna, Barettes and Thirsford. His widow Anne, married after 9 Jun 1585 as her second husband Sir Charles Cornwallis and they jointly held Carrow Abbey. In 1589 she presented to the church of St Julian’s in Norwich. Sir Charles Cornwallis had a distinguished career including serving as Ambassador to Spain and treasurer and died at Harborne co Suffolk 21 Dec 1629.

W.A. Copinger states in his book[1] that Ann Borrow was Sir Ralph's second wife. The children listed all have Mary as their mother, with the youngest born in 1580/81, while Ralph dies in 1580. The sequence of marriages and children and death is not clear.

There is a discrepancy in DOB between two sources, Tudor Place (1530 or 1531) and The Peerage (1535), both of which, however, are considered to be unreliable sources by the English Project, so additional sources would be helpful.

ask our community of genealogists a question.
Sponsored Search by Ancestry.com
DNA
No known carriers of Ralph's DNA have taken a DNA test. 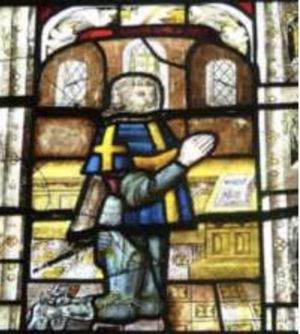 Ralph Shelton, although a knight, isn't a member of the English aristocracy as you have to have the rank of Baron or above for that.

Jack Schaffer Ph.D.
There are actually multiple problems with the Shelton family, some of which I'm afraid I contributed to, based on information from tudorplace.com, before I did the England training and found it it is not a reliable source. I have in mind to work on that family line at some point, but it does seem a bit daunting, as so little good information is available. If you have specific sources, I would much appreciate it.
posted May 12, 2020 by Jack Schaffer Ph.D.

Jack Schaffer Ph.D.
Shelton-5384 and Shelton-1375 appear to represent the same person because: I have records that indicate these two are the same person. I have not yet added Sir Ralph Shelton's second wife, who was Anne Barrow, as you have it. I'm not allowed to make the merge myself, because I am not on the trusted list. You could add me to that list, if yo wish! Thanks. There are also more children to be added, which I will do after they are merged.
posted Nov 19, 2018 by Jack Schaffer Ph.D.