Present at the Siege of Vicksburg and died in a Columbus, Mississippi hospital 3 months later.

John served in the 1st Arkansas Cavalry Battalion. The Battalion was present (dismounted) during the VIcksburg siege under the following officers: Capt. John J. Clark ,, Col. Robert W. Harper, Lt. Col. Daniel H. Reynolds [Link] The siege ended in July 1863. John died in a hospital at Columbus Mississippi on Oct 15, 1863. Note: Cause of death not known at this time.

Family Records and FOLD3 provide a death record for John W. Shoptow. The citation of this image is provided with the attached image. As of 6/26/2019, the following sites did not have a record of his service: 1) National Park Service 2) Edward Gerdes Civil War Page [Link] which is considered a quality source for Arkansas Civil War units 3) Family Search just forwards you to FOLD3

John's death record states he served in Co, F, 1st Battalion Arkansas Cavalry...... For category purposes he has been placed with Stirman's Battalion because: internet research says Stirman formed a Battalion on Feb 15, 1862, which included recruits from Russellville, Pope County (AR).... while John is currently not listed with this company (possibly to a name error), this company has a Cpl. John F. Shinn. (John Shoptaw's wife had a LNAB of Shinn.) and John Shoptaw was from Pope County.

Confusion caused by published errors: “History of Pope Co. Arkansas” has a biography on John’s father James Shoptaw, many family trees accepted erroneous information from this article. It said “John Wycliffe (Shoptaw) served in Co. F., 3rd Ark Batt, under Capt. James Russell. He died in the siege of Vicksburg.” The known errors are: 1) John died about 3 months after the siege of Vicksburg, in a Mississippi hospital 2) John served in Co. F, 1st Battallion Arkansas Cav. 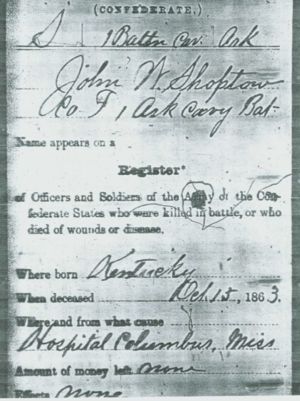