Sarah was a Friend (Quaker)


Sarah's marriage to Benjamin Smith was "permitted" by the Woodbridge Meeting, June 19 1712. The Archivists of Quaker Marriage records were helpful by indicating that the "permitting" probably on average would be at least one week prior to the actual marriage ceremony. [2]I can't say with certainty where Sarah's residence was prior to marriage. Benjamin Smith would have had a residence in NJ in proximity to Woodbridge, Amboy, Plainfield, Rahway.

Sarah's mother would not have been alive at time of marriage. We did find this one Quaker record placing younger Sarah with her mother and older sister Elizabeth, at the time Elizabeth gave birth.

Sarah had a key position in the Shotwell family tree. She was a daughter of John Shotwell Sr. and with her husband played a key role in the Quaker Woodbridge community. Sarah and Benjamin are direct ancestors of of Ambrose Shotwell, thru their grandson Samuel Pound b 1745, and their great grandson Hugh b 1773 in Plainfield. Sarah was living while Hugh was a young boy in the community.

Benjamin Smith was a man of public esteem in Woodbridge, held several civil offices and was at one time Justice. He adhered to the Quakers and was the appointed overseer, Nov 1728, successor to John Laing. Then after his death was succeeded by Jacob Thorne.

Children of Benjamin and Sarah:

id=QLpRAAAAMAAJ&pg=PA125&lpg=PA125&dq=%22Benjamin+Smith%22+%22Sarah+Shotwell%22&source=bl&ots=IsT1LWhrbi&sig=NklFK5vMBgZJwt5azU22oiIkEhs&hl=en&sa=X&ei=cgc9UqjoK6iiyAGMy4F4&ved=0CFcQ6AEwCQ#v=onepage&q=%22Benjamin%20Smith%22%20%22Sarah%20Shotwell%22&f=false Annals of Our Colonial Ancestors and Their Descendants], by Ambrose Milton Shotwell; page 125. See Also:

ask our community of genealogists a question.
Sponsored Search by Ancestry.com
DNA Connections
It may be possible to confirm family relationships with Sarah by comparing test results with other carriers of her mitochondrial DNA. However, there are no known mtDNA test-takers in her direct maternal line. It is likely that these autosomal DNA test-takers will share DNA with Sarah: 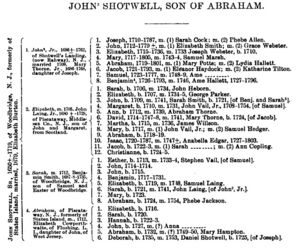 Dorothy Barry
Hi, Just wanted to let you know that WikiTree's Database errors picked up an error concerning the date of birth being different then what is on the Find A Grave source. It is also noted that the profile narrative has one date and the top statics have another. I believe the correct date should be 1690 not 1694 in the statics. Could you check that out please? Thanks!! Dorothy.
posted Apr 07, 2017 by Dorothy Barry