Jonathan Shreve, with his family, moved on a flatboat built by himself down the Ohio River and located on a tract of timberland near the present site of Cross Plains, Indiana, where he lived a number of years, joining the Baptists and serving as a Justice of the Peace.

Jonathan was a Justice of the Peace.

He sold his place and moved to Jennings County, Indiana, near Vernon, where he died.

He and his father served in the Indian war of 1816. John, the eldest son, remained at home, helping on his father's farm until he married when his father gave him a farm of eighty acres near Cross Plains.[1]

Children per The Genealogy and History of the Shreve Family[1]

ask our community of genealogists a question.
Sponsored Search by Ancestry.com
DNA Connections
It may be possible to confirm family relationships with Jonathan by comparing test results with other carriers of his Y-chromosome or his mother's mitochondrial DNA. However, there are no known yDNA or mtDNA test-takers in his direct paternal or maternal line. It is likely that these autosomal DNA test-takers will share some percentage of DNA with Jonathan: 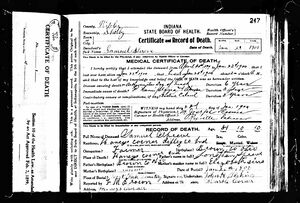