On leaving Winchester in April 1917, he went for 4 months to the Household Brigade Officers' Cadet Battalion at the Hall, Bushey Heath, then was commissioned in the Special Reserve of the Grenadier Guards. He went to France on 9 March 1918 and was wounded in the right thigh by shrapnel on 12 April 1918 on the River Lys.

The Battle of the Lys (also known as the Lys Offensive, the Fourth Battle of Ypres, the Third Battle of Flanders (French: 3ème Bataille des Flandres) and as the Batalha de La Lys in Portugal) was part of the 1918 German offensive in Flanders during World War I (also known as the Spring Offensive). It was originally planned by General Ludendorff as Operation George but reduced to become Operation Georgette, with the objective of capturing Ypres and forcing the British forces back to the Channel ports (and thereby out of the war). The battle began on 7 April 1918, and lasted until 29 April. In planning, execution and effects, Georgette was similar to (although smaller than) Operation Michael, earlier in the Spring Offensive.

Magdalen College (1919-22) where he was a Demy and graduated with an Honours Degree (second class) in History.

From September 1922 to 1926 he studied theology at St Edmund's College, Old Hall, Ware and from 1926-1928 at the Procure de St Sulpice, Rome. Having been ordained to the priesthood on 17 July 1927 he was Assistant priest to Bishop Bidwell and afterwards Archbishop Goodier at St Mary's, Cadogan St, Chelsea, from Jan 1928.

1934 Chaplain of Magisterial Obedience Order of Hosp. of St. John (address given as 36 Linacre Road, NW2). From 27 October 1937 served as a priest at Our Lady of Victories (just off Kensington High St) which was bombed during the Blitz.

Margaret Theobald was engaged to Hans Welser, an Austrian Catholic, and she took instruction in Catholicism from GWS who was invited back to Coleherne Court for tea where he met and fell in love with Jean Theobald (Margaret Welser's sister).

As his services as a priest in London were no longer required he went to stay with his parents in Croyde, Devon where Jean followed him. He was excommunicated in 1941 for marrying her on 6 March 1941 (honeymoon in Exeter, Devon), a penalty that was lifted some 10 years later.

1942 Cabinet secretariat then Foreign Office (Hans Welser helped him to get in).

Served in Rouen as Vice-Consul 1951-2 (Appointed 28 Aug 1951, London Gazette) and then returned to UK to work in the Foreign Office Library. Lived briefly in Queen's Gate Terrace SW7 then rented a maisonette at 30 Cornwall Gardens, SW7.

He was admitted to University College Hospital in late 1957 for an operation on his gall-bladder. He failed to take sufficient exercise following the operation and suffered a coronary thrombosis.

Is Guy your ancestor? Please don't go away!

ask our community of genealogists a question.
Sponsored Search by Ancestry.com
DNA Connections
It may be possible to confirm family relationships with Guy by comparing test results with other carriers of his Y-chromosome or his mother's mitochondrial DNA. However, there are no known yDNA or mtDNA test-takers in his direct paternal or maternal line. It is likely that these autosomal DNA test-takers will share some percentage (beta) of DNA with Guy:

Images: 2
Alexandra Sich with her two sons - Guy on the left and John 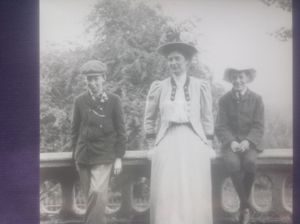 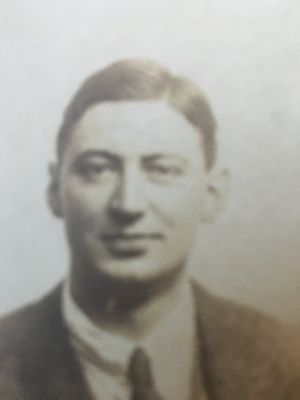