Itschak & Chaya Siegal were able to scrape enough money together to send their oldest child Nathan to America in 1922 to prevent him having to fight in the Russian Military. All Jewish boys and men were being forced to fight for the Russian Military at that time. They had hope at the time the rest of the family would be able to join him in America.

My Great Grandfather Nathan Siegal kept in touch by letters with his family back home before the war. He attempted to save enough money to pay for the rest of the family’s immigration to America as well but was unable to before he lost contact with them and they were murdered by Nazi’s in 1941.

His name and photograph were provided to me by my grandmother Charlotte Ross’s cousin Genny Brill. Genny’s mother Dvera was Nathan’s sister and Itschak & Chaya’s daughter.

Itschak Siegal’s name and birth year are recorded on Jewishgen.org

According to Oral Audio Recording from Nathan Siegal (before his death in 1991) his family owned a small store in Novagrad, Russia prior to his immigration. His family lived in the same building as the store. It seemed to be a house where the family lived in part of it and had the store in the front. The family was Orthodox Jewish but Itschak & Chaya allowed their daughters to attend school.

Is Itschak your ancestor? Please don't go away!

ask our community of genealogists a question.
Sponsored Search by Ancestry.com
DNA Connections
It may be possible to confirm family relationships with Itschak by comparing test results with other carriers of his Y-chromosome or his mother's mitochondrial DNA. However, there are no known yDNA or mtDNA test-takers in his direct paternal or maternal line. It is likely that these autosomal DNA test-takers will share some percentage of DNA with Itschak: 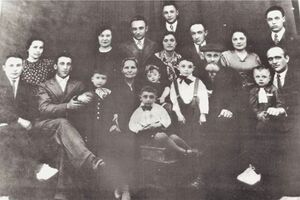