Sometime before 1910 the family moved to Center Township. All but William were living with the family. Frieda’s father was still a butcher, and James had joined him in the business. Gertrude was working as a teacher, Mary was a housekeeper and the youngest four, including Frieda were still in school. Frieda was a good student, she liked to sing and was in plays during high school. She graduated from Belle Plaine High School, June 1, 1916. In 1920 Frieda’s parents are retired, four of their daughters, one son and one grandson are also living with them. Frieda is now 20. She is working as a stenographer in an accountant’s office. January 6, 1921 Fredricka Margaret Siepmann married Bernard Roy Cook(1895-1959) at St Michael’s church in Belle Plaine. The two moved to Chicago after the wedding which is where Bernard was working as an accountant with the railroad. They returned to Belle Plaine for the birth of their first child, Richard Paul(1921-1997). They moved to Boone, Iowa with a promotion for Bernard. In Boone they had two more children, William Raymond(1923-1976) and Helen Jean(1925-2004). They also had a set of twins(1937-1937) who died at birth, they are buried in Sacred Heart Cemetery, Boone, Iowa. Frieda and Bernard moved back to Chicago for a short time in the twenties but returned again to Boone. In the late thirties Frieda and Bernard moved to Chicago once more and remained there until the death of Bernard in 1959. Frieda remained in Chicago with her daughter Jean’s family for a time. For the last seven years of her life she lived with her sister Nelle, in Cedar Rapids, Iowa. Fredricka Margaret Siepmann died September 8, 1972 in Cedar Rapids, Iowa. She is buried in Sacred Heart Cemetery, Boone, Iowa.

Is Frieda your ancestor? Please don't go away!

ask our community of genealogists a question.
Sponsored Search by Ancestry.com
DNA Connections
It may be possible to confirm family relationships with Frieda by comparing test results with other carriers of her mitochondrial DNA. However, there are no known mtDNA test-takers in her direct maternal line. It is likely that these autosomal DNA test-takers will share some percentage (beta) of DNA with Frieda: 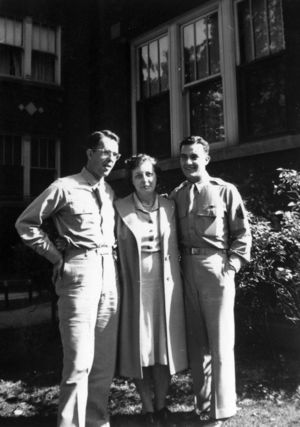