"Laurence Harvey (born Laruschka Mischa Skikne; 1 October 1928 – 25 November 1973) was a Lithuanian-born actor. In a career that spanned a quarter of a century, Harvey appeared in stage, film and television productions primarily in the United Kingdom and the United States. His performance in Room at the Top (1959) resulted in an Academy Award nomination. That success was followed by the roles of William Barret Travis in The Alamo and Weston Liggett in Butterfield 8, both films released in the autumn of 1960. He also appeared as the brainwashed Raymond Shaw in The Manchurian Candidate (1962)."[1]

"Harvey's civil birth name was Laruschka Mischa Skikne. His Hebrew name was Zvi Mosheh. He was born in Joniškis, Lithuania, the youngest of three sons of Ella (née Zotnickaita) and Ber Skikne, Lithuanian Jewish parents. When he was five years old, his family traveled with the family of Riva Segal and her two sons, Louis and Charles Segal on the ship, the SS Adolph Woermann to South Africa, where he was known as Harry Skikne. Harvey grew up in Johannesburg, and was in his teens when he served with the entertainment unit of the South African Army during the Second World War. As the Mystery Guest on USA TV show What's My Line screened May 1, 1960, he stated he arrived in South Africa in 1934 and moved to the UK in 1946."[2]

Laurence was married three times. His first wife was Margaret Leighton, whom he married 8 August 1957 off the Rock of Gibraltar. "Stars Wed at Sea To Avoid Lensmen. Gibraltar (UP)--British stage and movie stars Margaret Leighton and Laurence Harvey were married last night in a brief ceremony aboard a passenger tender. It was Miss Leighton's second marriage and Harvey's first. The actress said she wanted to get married at sea because "It's the only place where we can have a quiet wedding without photographers and all that."[3] They were divorced in 1961.

In October 1968, he married Joan Perry, the widow of the film mogul Harry Cohn in Nassau, The Bahamas. "Actor Laurence Harvey, Producer's Widow to Wed. Nassau, Bahamas, (AP)--Actor Laurence Harvey and Joan Cohn, widow of former Columbia Pictures boss Harry (King) Cohn, took out a marriage license yesterday. A friend said they would be wed before a magistrate. Harvey and Mrs. Cohn, former actress Joan Perry, have been constant companions since 1960 when she divorced shoe magnate Harry Karl after a 23-day marriage. Harvey, who rose to move stardom with "Room at the Top," has been married once before. He and actress Margaret Leighton were wed in 1957 and were divorced three years later."[4] Laurence and Joan were divorced October 1971 in Los Angeles.[5]

His third wife was the British fashion model Paulene Stone, whom he married in 1972. They were the parents of one child, a daughter named Domino who later became a bounty hunter and was the inspiration for the movie "Bounty Hunter." "Actor Laurence Harvey, 43, is all smiles. He says he'll marry his former girlfriend, Paulene Stone, 28, after he gets a divorce from his wife, Joan Cohn, 51, of course. Harvey, once married to actress Margaret Leighton, declared his feelings for Paulene, mother of a baby daughter and formerly wed to a photographer, were: 'Complete, total and absolute love ... she is one of the great loves of my life, and has been loyal and faithful all these years, and I'm very happy we're together again.'"[6]

Is Laurence your relative? Please don't go away!

ask our community of genealogists a question.
Sponsored Search by Ancestry.com
DNA
No known carriers of Laurence's ancestors' DNA have taken a DNA test.

Images: 2
Laurence Harvey and Diane Cilento in the "The Small Servant". 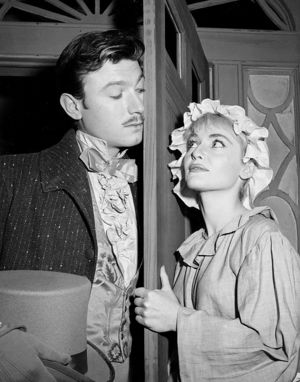 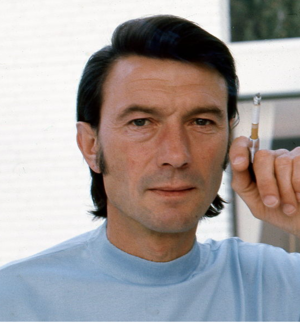 Laurence is 22 degrees from Laurie Giffin, 31 degrees from Toni Morrison and 17 degrees from Henry VIII of England on our single family tree. Login to find your connection.