John Sloan was born in Ireland.

-- Letter says: "served through the War of Independence....was wounded near Musgrove Mill in what was then known as siege of 96. (?) He carried the ball with him through his long life.....born 14th day of Sept. 1716 and died 26th day of Dec. 1829, aged 113 y., 3 mo., 12 da. He brought his young wife and two children with him, also a little Irish lassie. During a scourge of smallpox his wife and both children died and himself severely marked. After a widowhood of some years and at the age of 58 he led this Irish lassie (Jennet McNeere) at the age of 13 to Hymen's Altar. This proved to be a happy and fruitful marriage. They raised and educated 11 children, 6 boys and 5 girls: viz. Bettie, John, Robert, Mary, David, Mattie, Arch, Rosa, Jennie, Thomas, and William....... a native of Ireland, a soldier of 1776, and a sincere believer in Jesus Christ."[2]

Thanks to Seán Sloane Johnson for starting this profile. Click the Changes tab for the details of contributions by Seán and others.

ask our community of genealogists a question.
Sponsored Search by Ancestry.com
DNA Connections
It may be possible to confirm family relationships with John by comparing test results with other carriers of his Y-chromosome or his mother's mitochondrial DNA. Y-chromosome DNA test-takers in his direct paternal line on WikiTree: It is likely that these autosomal DNA test-takers will share DNA with John: 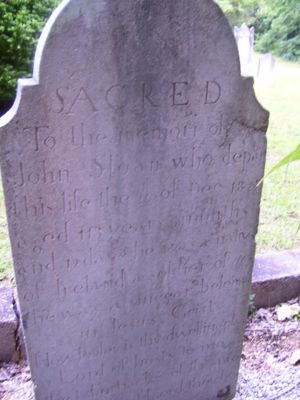 I was looking for John's parents to fill in some of my DNA information and went down the rabbit hole of the bible record/letter. Found a source for it and added it. I also updated the Bio section a little bit - Anything I have done can of course be reversed by clicking on the Changes tab at the top.

Would you like to add this profile to the US Southern Colonies Project (you should join the project too cousin)? If so visit the project page and add the template. Your wonderful cousin, Mags

John is 17 degrees from Donald Howard, 16 degrees from Julia Howe and 18 degrees from Henry VIII of England on our single family tree. Login to find your connection.