N. M. came to Gonzales, Texas and started paying taxes in about 1857. (Gonzales Co. tax records) He was with a then 7-year-old boy--James Wylie Smiley (b. 1850), assumed to be his son from his first marriage in 1848 to Elizabeth A. (mistranscribed M.) Cooke of Union Co., AR. (Marriage records Union Co.) With NM and boy, JW Smiley on Gonzales Co., Texas 1860 Census was a mason named Thomas Stone who was a school builder/teacher.

James Wylie's daughter's (Alma Hinson) death certificate (filled out by Sarah Seale O'Neill) lists James' birthplace as Camden, AR (in 1850). This is just north of Union Co., AR where Neal M Smiley and Elizabeth A. Cooke were married in 1848 in a Primitive Baptist Church. NM was 20. Elizabeth was very young (mid-teens) and parental approval was required. I don't find her again. (Union Co. AR, Marriage records)

N. M. may have come to TX by water, taking the Ouachita River from Union Co. (via the Atchafalaya or Mississippi) down to Gulf Coast,, then by boat to Matagorda Bay and up the Colorado River from there to ultimately arrive in Gonzales area (Columbus). This is just an old family story so not necessarily true.

Sarah Adeline (Addie) Seale, eldest (?) daughter of Eli Yarborough Seale was illiterate--married N. M. Smiley in Gonzales in 1860. (Gonzales Co. marriage records) He died in 1870 (buried Leesville, TX cemetery) after 4 children by second wife (the last, Neal Smiley born after his death). His wife Sarah remarried within 3 years to Henry O'Neill, a neighbor who already had several children from a recently deceased wife. He and Sarah had a few more. She outlived O'Neill and died many years later. (Karnes Co. death records)

Birth and death dates for N.M. are from Leesville cemetery tombstone which had fallen over and was in good condition when first found over 20 years ago by me. [1] The cemetery has since reset it en plaque and I have added a new marker. Photos of old marker on Ancestry.com under my files. Will add replacement marker images soon.

Of NM and Sarah's children, Mary A --eldest--left home before her 20th birthday (so not on any census as a Smiley child) and married a D.M. Griffin. She outlived him. A subsequent marriage to a fellow named Jacob Absolom Martin. Buried Mary Martin on 5 Jan 1916 in Kenedy, Karnes County, Texas, USA. Son Eli Smiley had a daughter named Beulah. Son Neal Smiley Jr. disappears. Other daughter Mattie dies in youth -- about 16-- buried in Floresville, Wilson Co., TX. [www.findagrave.com/memorial/69174556/mattie-l_-smiley]

Per 1900 Census showing N.M.'s son Eli V. Smiley, his father was born in FL, however, other censuses show Georgia.

The oldest story in my family is that the Smileys came over to America from England or Scotland as part of the Oglethorpe Colony in Savannah, Ga. as indentured servants in the early to mid 1700's. Have not been able to prove that yet.

Is N M your ancestor? Please don't go away!

ask our community of genealogists a question.
Sponsored Search by Ancestry.com
DNA Connections
It may be possible to confirm family relationships with N M by comparing test results with other carriers of his Y-chromosome or his mother's mitochondrial DNA. However, there are no known yDNA or mtDNA test-takers in his direct paternal or maternal line. It is likely that these autosomal DNA test-takers will share some percentage of DNA with N M: 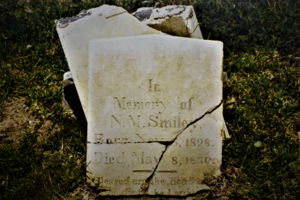 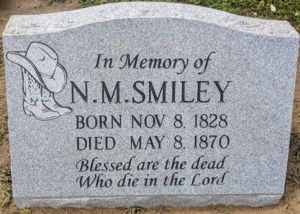