Richard "Bull" Smith, the Long Island patentee, was NOT the same Richard Smith who went to Taunton, Massachusetts, then settled in Rhode Island.

Appearently Richard Smith used a large bull as other people of the time used horses; as a personal conveyance.[1]From this he was known as "The Bull Rider", or Richard "The Bull" Smith. And his family from that point forward were known as the "Bull" Smiths, as other Smith families in the area were known as the "Rock" Smiths, or the "Tangier" Smiths[2]. There was also a story (that some attributed as myth) that says "he made an agreement with the Indians that he could have all of the land which he could encircle in one day riding on the back of a bull."[3][4]

About 1639, but it is not known where he started his journey. He settled in Southampton and Smithtown, New York[5]

Sarah Hammond by abt 1640[6] perhaps in Smithfield, Suffolk, NY,

Dated 5 Mar 1691, Richard's will was a joint will with his wife Sarah. The prelude sasys "I Richard Smith Senr fo Smithtown" only but statements are made "We", "our" They name their children: Jonathan Smith, our eldest son, sons Richard, Job, Adam, Samuel, Daniel, daughter Elizabeth Townley and daughter Lawrence. Sons Jonathan and Richard were named executors. Richard Smith and Sarah Smith signed the will. Sarah made a second will 20 Jan 1707/8[9]

Children of Richard and Sarah

Birth : 1613 Myreshaw, Bradford, Yorkshire, England
Parents are unknown. The Wethersfield, Connecticut, Richard had a son Richard but he married Mary Weed. Richard, the son of Richard Wickford, Rhode Island, married Esther. He died 16 March 1691 and will was probated in 1692, which would easily cause confusion.

ask our community of genealogists a question.
Sponsored Search by Ancestry.com
DNA Connections
It may be possible to confirm family relationships with Richard by comparing test results with other carriers of his Y-chromosome or his mother's mitochondrial DNA. However, there are no known yDNA or mtDNA test-takers in his direct paternal or maternal line. It is likely that these autosomal DNA test-takers will share DNA with Richard:

Images: 5
The Will of Richard Smith 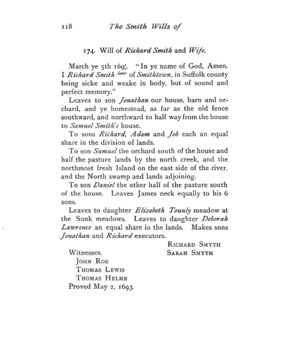 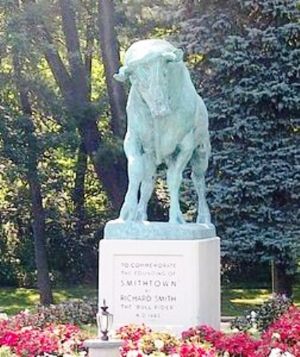 The Family of Richard Smith of Long Island pp 23 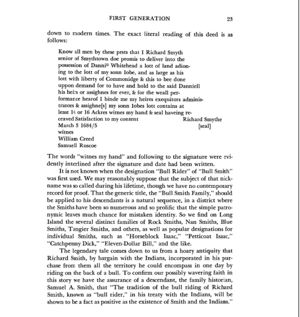 The Family of Richard Smith of Long Island pp 29 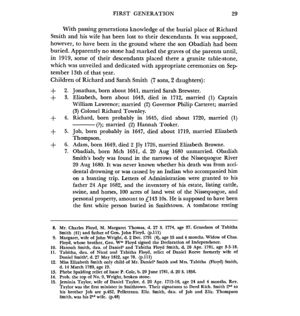 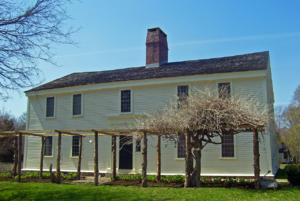 Leave a message for others who see this profile.
There are no comments yet.
Login to post a comment.
S (Hill) Willson
Based on his arrival in 1639, it appears he should have the Puritan Great Migration template applied to his profile
posted Feb 24, 2020 by S (Hill) Willson

Anne B
The 1967 book names no parents. Said parent should be detached. Objections?

Anne B
Is there a source for these parents? I'm pretty sure he's not the son of the attached Richard. Richard of Wethersfield's son Richard married a Weed. I'm still trying to figure out Elizabeth. If you have any knowledge please see theG2G discussion

Ron you added the pages from the 1967 book. Did it have any information on his parents? I'm on the waiting list.

Tamara Flora
The riding of the bull to claim the land is the story Im familiar with. I think it was a challenge in response to the amount of land he wanted and he tricked the indians by using the bull instead of walking.  :)
posted Jul 30, 2018 by Tamara Flora
Anonymous Hankins
Smith-1208 and Smith-6921 appear to represent the same person because: 6921 is just a stub. The need for a merge has become obvious with the merger of the spouse.
posted Jul 11, 2018 by Anonymous Hankins

Richard is 16 degrees from Donald Howard, 9 degrees from Julia Howe and 11 degrees from Henry VIII of England on our single family tree. Login to find your connection.