I am a direct Descendant of Yeoman Magnus Redland Who was the son of Thomas Redland of Redland of Stromness,Orkney,Scotland,who was among Earldom. And an owner and occupier of an as of yet unknown and vast amount land and property. 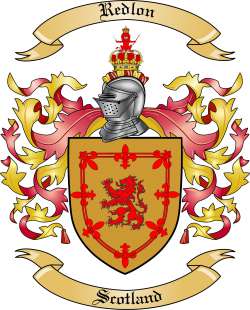 I am fourth cousins with Stephen Longfellow IV father of

Why am I so interested, and Why do I care so much?

For me, it was from being interested in learning and wanting to connect the origins of names and different regions. And my highest interest in educational History. Is the history of Christianity from the first century in Turkey(Asia Minor),Egypt,and Rome too the history of the "Early Anglo-Saxon Christian Conversion" in in the British Isles,(named Briton), And also in Eastern Europe of Scandinavia and Germany.

There is some very interesting things going on during(too be brief and bold) the 1st thousand years A.D. along those lines of the world and it's ancient History.(obviously...like I said though very brief)

Here:CHURCH FATHERS: Home you can find the grand majority of the Ancient writings from the "Church Fathers" or the "Venerable Saints". A lot of these writings have much great History. And priceless preserved history.

The quote I'm going too put at the bottom is by one one of my favorites among the many ancient.writers "Saint Bede", in a one and only English translation of this work (and isn't on the above website,but there is a well formatted Ebook version) called "The Reckoning of Time",[Page.54];written by; "Saint Bede" in the years.C.722-C.725,A.D.;Translated by "Faith Wallis",1999,Liverpool University press;Edited by The "Editorial Committee of Liverpool University,(1999)"

"has a name which is now translated "Paschal month", and which was once called after a goddess of theirs named "Eostre", in whose honour feasts were celebrated in that month. "Now they designate that Paschal season by her name, calling the joys of the new rite by the time-honoured name of the old observance."

Purpose and meaning of genealogical Histories

Trying to find our living relative/es to where It has the potential to connect the inner/outer emotional connection with thousands(realistically) Too fully!!.. understand we're equal in trait but differ in driven interests and specialty. Which must really the greatest thing ever. Looking into what unknown historical context can be discovered UNDERNEATH MUCH of it's revolving popular view matching up 1st hand authentic documented evidence;Tax scrolls,execution letters(deeds),court hearings, baptisms,weddings,funerals. the catch is Unless highly secured and, or, conservatively preserved.it will generally deem them much more difficult too obtain for research especially if the purpose for an individual families genealogy over 300+ years ago!! and solely dealing with the specific individual names!? No we could not download free pdf books back then. So if lost, by mistake or stolen, then the picture is obvious where concise (AKA) NOTES of thought begins.IT should begin with how do these websites know so much that is unknown?Well be sure too give it the benefit of the bought and go investigate it, give it very critical thinking.All in terms of historical context,the system or language as a whole usually dealing with consonants and phonics, just take your self back to that time in an educated and practicing way.check photos of buildings. like an Cathedral, or museum for example most definitely how they have proven well preserved. try in searching different styles of records as well such as wall painting with historical influence, inscriptions and symbolism's of shared general regional views or encoded linguistics such as Maltese perhaps(Which was invented to be encoded writing of Roman numerals with combined Yiddish/Aramaic dialects as vocabulary bank) But even though your open minded understand that calling out what's false in the name of education is 100% appropriate when addressed so in an polite humble way. So the opposite of condescending,the opposite of hasty backlash such as "well Tom, you would be correct if you understood a false pedigree written durind so,so,so's kingship, Really!!? looks like, It originated with blah,blah,blah. and you maybe able to prove it but it's impossible"(so give up in other words)

Just remember to try an hold said person accountable if rejecting something that may be true or false. focus on it when you have or if you have the time too give. You may want to ask more questions at that point.(correct or incorrect) if your going about it on a fair level your mind will be clear an open to gain the new knowledge and be corrected if even applicable in listening all ears while other one is being polite or saying little if nothing if you understand, and trading the same courtesy of a non personal respecting rebuttal if need be...BUT AT THE SAME TIME IF YOU ARE NEW OR SEASONED EVEN UP TOO ALL COSMOS OF ACADEMICAL HORAS,DON'T...LET...The...statement that's been made be the FINAL...DEFAULT...CONCLUSION. UNLESS..IT..CAN..BE..PROVEN.

Standards of research hold absolutely no favorites Of ones achievements, nor any grudge for ones honest even borderline sketchy Mistakes. ""But when intentions are forced upon jesting, and destroying someones hard work (even if they saved it to a file) you might as well have pulled that trigger, because that is how much hate has been given, which is equivalent too destroying our fight for a correct answer on said persons Geology ,Our true achievements. THANK YOU EVERYONE FOR BEING SO INTELLIGENT AND HELPFUL!!!! THANK YOU MUCH FOR READING THIS AND ALL OF YOU HARD CONTRIBUTED WORK MUCH LOVE XD

1776
Seems to be one that would be a lot more laid back for starters just to get warmed up. And I really want to find the Sherman in my Family.
CONNECTORS
Connections in all encompassing directions XD
DATA_DOCTORS
make sure view click the suggestions tab thats under "my profile" and under "your LNAB-Tag"Too start Data_Doctors, for yours and others Wikitree profile entries. XD
EMERY
connection
ENGLAND
Something I'm in the works with in the united_kingdom project
JEWISH_ROOTS
I love The original Alphabet that is of "Ancient Poto-Cananite"
MAGNA_CARTA
yay
MAINE
where I am my entire lineage is from all over Saco County,MaineXD
MOULTON
connection
PAGE
connection
PGM
is quite fun and very challenging, but the pilgrim hall museum of MASSACHUSETTS is one the greatest historical treasure keepers in history, and no thanksgiving conspiracy theories.finally.
REDLAND
My Grandfather Thomas Redland
REDLON
My Grand father Yeoman Magnus Redland Aka Redlon
RIDLON
connection
SCOTLAND
It is something i'm in project with here on wiki tree with united_kingdom project
SCOTTISH_CLANS
I have many debates concerning addition too the concise of the Riddell Clan.

We haven’t heard back from you concerning the Scottish Clans Transition. If you are still interested and we haven’t received a response from you by 27 March 2020, you will be welcome to rejoin by answering the current g2g thread for joining the Scotland Project.

My name is Amy and I’m a co-Leader of the Scotland Project. As you may have heard, we have merged the Scottish Clans project into the Scotland Project. I am contacting you today to find out if you are interested in continuing with us under this new format. If you would like to go forward on the Scottish Clans Team, please reply and let me know which clans you have been working on or would like to work on. I look forward to hearing from you.

We are sorry to lose you as a member of the Connectors Project, but we understand that life gets busy and interests shift. Please know that you will always be welcome to rejoin the project in the future if you wish.

Thank you so much for your participation; we genuinely appreciate it.

I havent heard back from you about the break up of the United Kingdom Project. I hope all is well with you. I assume you dont wish to join any of the country-level projects at present, and will go ahead and remove the United Kingdom badge. If you wish to join England, Scotland, Wales or Ireland in the future, you would be most welcome to do so via the respective G2G sign-up post.

Many thanks for all your contributions,

We realise the time has come to dissolve the UK Project in favour of the individual country projects of England, Scotland, Wales and Ireland.

We are checking in with all UK badge holders to find out which country project(s) you would like to be in so you can collaborate with other members, have the opportunity to select which team(s) you would like to join, and so we can ensure you have all the correct badges.

Please respond by PM to let us know which country project(s) you would like to be in. Please dont assume we know. We are effectively starting from scratch to make sure no one falls through the cracks.

Once you have done this, the Coordinator for Membership in the relevant country project(s) will be in touch to help get you situated.

It has been a couple of weeks since we contacted you about your participation in the Connectors Project and as we haven't heard from you, we are following up to make sure you wish to remain a member. We understand that interests shift as we grow our shared tree and that some members may have moved on to projects more pertinent to the branches they are currently building. If this is the case for you, please let us know. If we do not hear back from you within the week, we will assume you have moved on to other things for the moment and remove you from the project. Please know that you will always be welcome to rejoin should your interests shift back in this direction. Thank you so much for your participation; we genuinely appreciate it. Michelle~ Volunteer Coordinator

On behalf of the Connectors Project Leaders, we are doing a six-month check-in with members. Please let us know if you are still active. If you are active, please let us know in which ways you are currently contributing to the project.

What source are you looking at that does not show Robert Knight identified the surname of his grandson John Redman, Jr.? Old Norfolk Records list his grandson's surname, so I am unsure what you are referencing.

Robert Knight would have been John Jr.'s grandfather - not grandfather in law. Robert's daughter, Margaret, was John Redman Jr.'s mother.

So you were right about in-laws, except it was Richard Knight as the brother in law to Rowland Young.

At least that is my take :)

The source you added as a comment to Margaret Knight Redman shows her father as Robert, not Richard. It shows her brother as Richard. Is there something I am not seeing?

The book sources listed (at least most of them) show her to be the daughter of Robert, but they do not provide any primary source records for the information. The best sources for tying her to Robert as her father, are Essex Antiquarium and Pope's book. They show that Robert gave land to her son, John Redman, Jr. in 1666/1667 timeframe. Neither list a primary source, but the dates are quite specific and likely there are primary sources to back them up.

What source are you referring to showing Margaret (Knight-1279) Redman's name is Mary, and her father is Richard? Noyes, gives her name as Margaret and father as Robert. Thank you.