Thomas Smith is one of twins.

Thomas Smith and his twin sister Mary were baptised on 26 February 1808 in Grafton Regis, Northamptonshire, England. There father William was 48 years old and their mother Martha was 44.[1]

He married Elizabeth Meekins on 25 December 1825 in Grafton Regis when he was 17 years old.

In the 1841 census he is living in Grafton Regis, with his wife Elizabeth & children George, Luke, Sarah, James, William and Elizabeth. .[2]

He was a lawyer.

He died on 2 April 1871 in Northamptonshire, England. 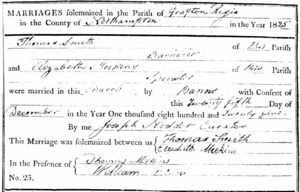