Joseph Smith
Born about 1629 in Stratford on Avon, Warwick, England

(We now know that Joseph was not the youngest of the brothers and there were more than four brothers. See [2]) Youngest of the four brothers: Christopher, William, Simon & Joseph who "removed from Bristol, England" (according to A Genealogy of the Smith Family. Compiled by Rev. Theophilus Smith, Published by Fred N. Smith, Castile, New York, 1878. Pages 1 & 3, Pages 4 & 5, Pages 6 & 7, and Page 8.)

It is easy to see how these Smith families got confused. On page 2349 of Families of MA, there is a good article about a Richard Smith family, but even this fine reference has these Smiths mixed up. It is only with yDNA testing that we have been able to unscramble some of the mis-connections.

On page 2349 of Families of MA, the Richard Smith line incorrectly goes to Sergeant Joseph, son of Joseph and Lydia Wright, when yDNA has shown us that Sergeant Joseph was the son of Joseph Smith and Lydia Huit (or Hewett) Smith of Hartford. I am looking for more published records to support this. I expect that the two family lines will look like this:

Lydia Huit was the daughter of Rev. Ephraim Huit of England, then Windsor, CT. They were Puritans and left England primarily because of religious persecution.

He was one of the twenty-four persons who petitioned the General Court of Massachusetts, in May 1653, for liberty to "plant, possess and inhabit Nonotucke." As all but one of the petitioners were living under the jurisdiction of Connecticut it was supplemented by another petition signed by Dea. Samuel Chapín, John Pynchon and Elizur Holyoke of Springfield. These petitions were acted upon favorably and Nonotucke (Northampton), was bought from the Indians the following September. Joseph Smith, however, did not remove to Northampton, but his brother Christopher was one of the early settlers there.

Sponsored Search by Ancestry.com
DNA Connections
It may be possible to confirm family relationships with Joseph by comparing test results with other carriers of his Y-chromosome or his mother's mitochondrial DNA. Y-chromosome DNA test-takers in his direct paternal line on WikiTree: It is likely that these autosomal DNA test-takers will share some percentage of DNA with Joseph: 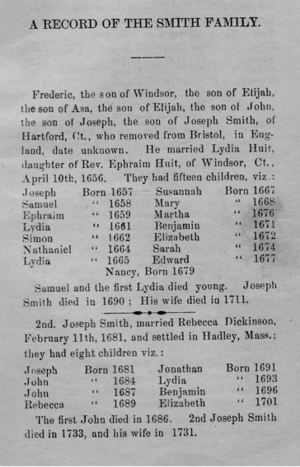 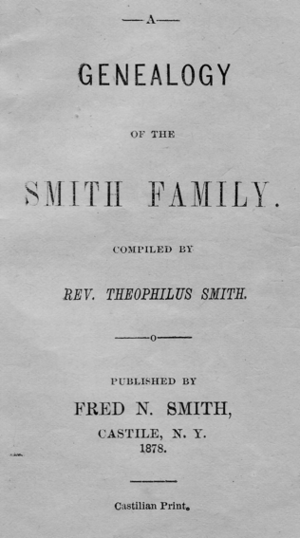 Brad Stauf
Thanks for catching this one Anne, did you intend to submit merges for Lydia and her father Ephram too? It looks like those are the only other ones needed and both are equally unsourced.
posted Mar 11, 2022 by Brad Stauf

Anne B
They need to be merged but I was on to something else. Please go ahead and propose merges
posted Mar 12, 2022 by Anne B

Jillaine Smith
Chances are that Lydia's birth was 1665/6. Can we get a definitive source for it?
posted Dec 26, 2019 by Jillaine Smith

Anne B
Smith-26374 and Smith-1807 appear to represent the same person because: Similar birth and death, but he had been attached to an incorrect parent
posted Apr 17, 2019 by Anne B

Kitty (Cooper) Smith
Smith-59988 and Smith-1807 appear to represent the same person because: Newly viewed books (Registers of Stratford on Avon) clearly show the children of Christopher and Alis Gibes Smith. These two profiles are duplicates that need to be merged.
posted Apr 29, 2015 by Kitty (Cooper) Smith