William was born in 1883.[1] He was the a son of George Washington Smith and Melinda (Goatcher) Smith. He passed away in 1907 in Dayton, Eddy County, New Mexico Territory.

William had been living in southern New Mexico for about a year in March of 1907 when he was accidentally shot by a friend. Mortally wounded, William lingered for a time but passed away the next morning. See the attached image of the Carlsbad Current-Argus newspaper story about this event.

In the article, there is mention of a brother, age eighteen, who was also in Dayton, New Mexico at the time. This would have most likely been John Thomas Smith. The article also relates that Will Smith was insistent, as he lay dying, that the accidental shooter take care of Will's sister. The only way this makes any sense would be if she were to also have been in Dayton during this unfortunate event. This sister must have been Lydia Mabel Smith, who was only seventeen at the time, thus warranting Will's concern.

William was the younger brother of my maternal great-grandfather, Alfred Mayberry Smith, and uncle of my grandmother Ruby (Smith) Duckworth. Will was apparently named for his father's older half brother, William A. Smith.

I visited the location in Eddy County (Dayton, Artesia) where William died, but found only capped oil wells and the desolate remains of a small town. While I suspect William's remains were buried there in New Mexico somewhere, there are no records to be found of where that may have taken place.

BOB FAULKNER IS NOW IN CUSTODY.

The report received here Saturday by Sheriff Ballard that Bob Faulkner had left Dayton and was being hunted by the officers of Eddy county was a mistake. Faulkner never tried to run away. He gave himself up with out resistance, and is now in the custody of an officer there, the town being without a Jail. Faulkner shot and killed his friend Will Smith at Dayton Friday night. Sheriff J. D. Christopher, of Eddy county, and the constable from Dayton came up Sunday morning and took the two women and one man, who were arrested here as witnesses, back to Dayton Sunday night. Faulkner's hearing was set for this afternoon.

C. H. Spencer, assistant prosecuting attorney, went to Dayton Sunday night to conduct the inquest over the remains of the late Will Smith, who was shot Friday night, as told last Saturday in the Record.

"Robert Thomas Faulkner took his wife and family to Dayton, New Mexico, where he ran a saloon. He had to leave Dayton after his trial and acquittal for killing his best friend in a drunken card game. In 1905 [1907?] he moved to Hope, New Mexico where he was a sheep shearer. Neil Douglas Faulkner (8/5/1910-8/7/1986) was born in Hope, New Mexico. Sometime around 1915, the family moved to Taft, California where he worked in the newly discovered oil fields."

Is Will your ancestor? Please don't go away!

ask our community of genealogists a question.
Sponsored Search by Ancestry.com
DNA Connections
It may be possible to confirm family relationships with Will by comparing test results with other carriers of his ancestors' Y-chromosome or mitochondrial DNA. However, there are no known yDNA or mtDNA test-takers in his direct paternal or maternal line. It is likely that these autosomal DNA test-takers will share some percentage of DNA with Will:

Images: 2
Story about the death of William Smith. 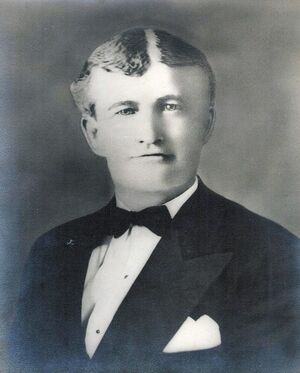