William Smith
Born about 1617 in Stratford on Avon, Warwick, England

This profile is part of the Smith Name Study.

"WILLIAM, Wethersfield 1644, br. of Christopher of Northampton, where probably he did not seat himself until ten or a dozen yrs. later, but must have been here at Wethersfield with William, or at Hartford with the other brothers, Joseph, and Simon, and sister Mary Partridge. William married 16 Aug. 1644, Elizabeth Standley, perhaps daughter of Timothy. William made clerk of the military company. next yr.; perhaps was of Middletown 1649, for there are recorded births of his first six children though probably the first two were born at Wethersfield viz. Jonathan, 20 Jan. 1647; Jobanah, 2 Jan. 1649; Susanna, 20 Mar. 1651; Elizabeth and Mehitable, twins 20 May 1653; and Joseph,25 Aug. 1655. Removed to Farmington soon after, joining the church and brother Joseph to baptism 15 Mar. 1657. In Farmington, they had Benjamin, bapt. prob. 11 (not 14, as in Geneal. Reg. XI. 325) Apr. 1658; William, b. Apr. 1661;and Samuel, May1664; was in the list of freem. 1669, and d. early next yr. His widow Elizabeth d. 1678, and three of the nine ch. d. in the interval, viz. Elizabeth William, and Jobanah, wh. was a soldier in Capt. Newberry's comp.in Philip's war, k. by the Ind. Three of his s. Jonathan, Joseph, and Samuel, liv. at F. but nothing is known of their condition." Savage

May have arrived around 1632 in New England on the ship "William and Mary" with siblings: Christopher, Simon, Joseph and Mary. Source: http://www.rootsweb.ancestry.com/~ctsmfsd/Smith.html

one of the four brothers (William, Christopher of Northampton, Simon & Joseph) and sister Mary

Sponsored Search by Ancestry.com
DNA Connections
It may be possible to confirm family relationships with William by comparing test results with other carriers of his Y-chromosome or his mother's mitochondrial DNA. Y-chromosome DNA test-takers in his direct paternal line on WikiTree: 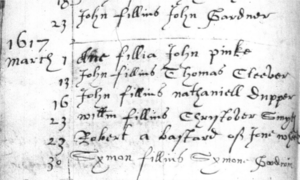 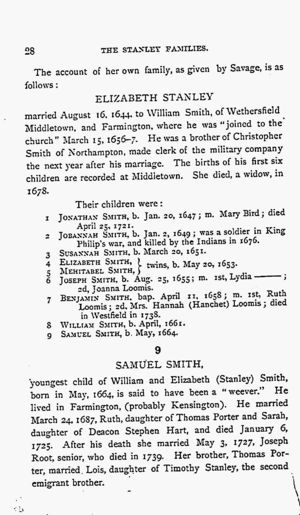 William is 11 degrees from Cecil B. DeMille, 19 degrees from Rosalie Neve and 12 degrees from Henry VIII of England on our single family tree. Login to find your connection.