Benjamin Fletcher Smith was born on April 3, 1824 in Woodbridge, Suffolk, England, United Kingdom. He was the son of Thomas and Sarah Smith. He was christened on October 11, 1824 at the Ebenezer Wesleyan church in Ipswich, Suffolk, England. [1]

In 1841, according to the England census, Benjamin was living on George Street in Christchurch, Surrey, England. He was 17 years old and employed as a hatter apprentice. [2]

When he was 21 years old, Benjamin married Mary Ann (Knight) Smith, on July 21, 1845, at the 'Established Church' in Polesworth, Warwickshire, England. Henry Hull and Elizabeth Knight were witnesses to the marriage. [3]

In 1851, according to the England census, Benjamin was 26 years old and living with his wife, their first two children and a domestic servant at their home on John street in Christchurch, Surrey, England. His occupation was 'hat finisher' . [4]

In 1856 he immigrated with his wife and three children to Australia. Both Benjamin and Mary Ann were 32 years old. Thomas was 10, George was 6 and Clara was 9 months old. They arrived in Melbourne, Australia on July 5, 1856. [5]

After arriving in Australia Benjamin had two more children with Mary Ann Knight in Launceston, Tasmania: a son 2 Jun 1857[6] and a daughter 2 Aug 1858[7]. Neither child was named at birth.

There are no sources supporting a second marriage to Mary Ann McSweeney. When he married Mary Ann Knight he was a bachelor, so another marriage would have taken place after the birth of their last child in 1858, if it happened at all.

relationship to Fletcher and Nash

There's a bit of doubt about this generation of great great grandparents. It is possible that Benjamin Smith was married to X Fletcher (probably a non-catholic) and X Nash was married to X McSweeney because Jane Nash was said to be Irish Catholic. 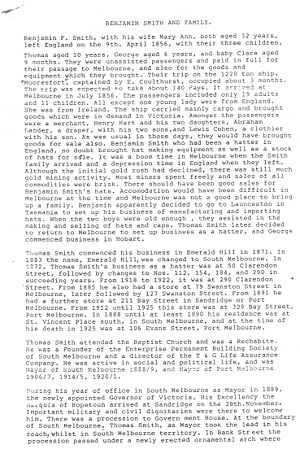 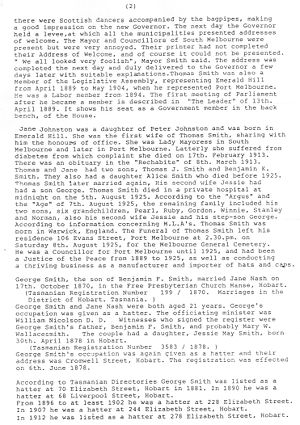 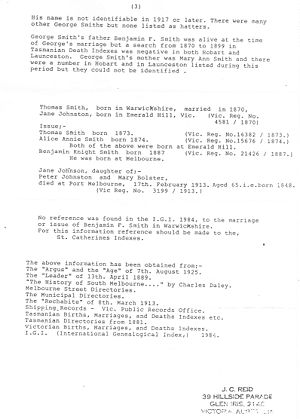