On this 16th day of April 1890, at Hicks, County of Vernon, State of Louisiana, before me, W. J. Roudebrush, a Special Examiner of the Pension Office, personally appeared Catherine J. Smith, who, being by me first duly sworn to answer any all interrogatories propounded to her during this Special Examination of aforesaid pension claim, deposes and says:

My name is Catherine Jane Smith, was born in 1826, live on my farm, my post-office is Hicks, Vernon Parish, La. I claim pension on account of the death of my husband William Smith while serving in the Federal Army during the War of the Rebellion.

My maiden name was Catherine Jane Sellars. My husband and I were both born and raised in Thomas County, Georgia. We were married in Thomas Co., Ga., June 15th ’63 [should be 1843] by Revd. Henry C. Tucker. Neither my husband, William Smith nor I was ever married prior to our marriage to each other. I knew William Smith only about a year before I married him, but he always lived in the same settlement, only about 12 miles from me and I knew his people and knew of him.

In the fall after our marriage we moved to Florida, lived there two years then moved to Attala County Mississippi. In 1859 we moved to this place and lived together right here till he entered the army in 1864. He was never in the Rebel Army, was pressed into service once or twice in the Home Guards.

He was in the Seminole Indian War before I married him. I can not tell in what Co., or Regt. My husband was serving at the time of his death. John Bass, who is my near neighbor served in the Federal Army with my husband and can tell about his service. I don’t recollect of any one else in this neighborhood, who served with him.

I can’t be certain about when my husband was born, I am certain that he was raised in Thomas County, Georgia, but it appears to me I heard him say he was born in South Carolina. I can’t tell how old he was when he entered the army, he was eight years older than I. He was just about the height of my son John (John is about 5 ft. 8 inches Ex.d) was slender built, had coal black hair and blue eyes. I learned of his death from my cousin Wm. Watson (dead, Ex.d) who went out with him in the army. I also learned from Thomas Watson of his death. Every thing of his, even to his pocket knife was brot [brought] back to me. I was told that he died of this here chronic diarea [diarrhea] in July, or August after he left here. He left home April 11th, ’64 to go to Alexandria to join the company. I can’t recollect when it was he died or whether it was in hospital.

I had living at the time of my husband’s death five children under the age of sixteen years. Mary Jane, Eliza, Margaret Ann were all born in Attala County, Miss. My son John Archer Smith was born here in October over a year after we moved from Mississippi. My youngest child Rebecca Lucretia Melvina was born, as well as my recollection serves me, the 5th of December, 1864 – after her father’s death. I am unable to state from memory the exact ages of all my children. We kept in the family bible the ages of the children. My husband could not write, so we just got whoever was present at the birth of a child to set down the dates. The bible was a big heavy book and came all to pieces in our moving about. It had come to pieces before John was born and I just saved the pages that were of thicker paper and had the ages of my children. About a year after the war, not more than two years I got somebody to copy off these pages into a day book. I don’t think the ages of my two youngest children were ever entered in the family bible though they may have been set down on the loose sheets. I don’t remember who made the copy into the day book for me, though I might think if I had time to study awhile. This day book was in my possession till a short time ago, when I let Judge Blackman have it to fix up my pension papers. I have sent for this book to be examined by you. The leaves of the bible were eaten up by moths years ago.

My six children above-named are all still living. Mary Jane, Eliza and Margaret Ann are still living at home with me. Amanda Elizabeth is the wife of Wilson Jowers, Rebecca Lucretia is the wife of Clay Parker, my son John is married and living to himself. They all live right around me here, lived with me till they were grown.

I have not remarried, have not lived with any man as his wife since the death of my husband William Smith. My husband was never a sickly man, was in good health when he went to the army. He was always a farmer. I did not apply for pension sooner because I did not know about the law, did not know I could get it. I can not write, have not made more than my mark to any paper in my pension claim. I have give you the book in which is set down the dates of birth of my children. These dates were put down over 20 years ago by my brother-in-law, Arch Hyat, who has been dead many years. I do not want to be present or represented during your examination. This statement has been read to me. It is correct. her Catharine Jane X Smith mark Deponent Witness: W. J. Bass W. J. Roudebrush

Sworn to and subscribed before me this 16th day of April 1890, and I certify the contents were fully made known to deponent before signing.

[Note: the oldest child of Catharine J. Sellars Smith & William Smith was not listed in this deposition – Emeline Smith who was married at the time of the deposition to Jeremiah M. Bass. She is listed on other papers filed with this report. Jm] 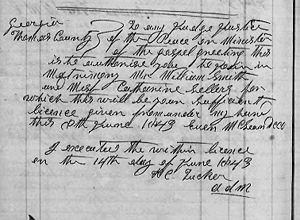