Levi was born about 1839. He is the son of John Smith and Sophia Deshong.

LEVI SMITH Levi Smith died of paralysis at his home in Whips Cove, Thursday, April 23, l914. Mr. Smith was a son of the late Rev. John Smith and was born in Bedford County, March 8, l828, hence he was aged 86 years, 11 months, and 15 days. Mr. Smith joined the Christian Church at an early age and was a consistent member of some 60 years, and was a trustee at Jerusalem church in Whips Cove, of which he was a member. Levi Smith was married at an early age to Miss Martha Jane Mills daughter of Mr. and Mrs. Jacob Mills of Bedford county, to which union were born ten children five of whom are living. The funeral was held Saturday, April 25, at the Jerusalem Christian church, Rev. J. R. Logue officiating and the body was laid to rest in the cemetery adjoining the church. A beautiful character was Levi his life was an exemplary one, which any one could safely follow. His death has cast a gloom of sorrow over the whole neighborhood, as he was a friend of all who knew him. In all his social life, he demonstrated the heroism of a true christian man. He is survived by his wife and five children, namely, Dennis living near Hancock, Md., Lizzie, wife of Simon Clabaugh, of Lemars, Iowa; Rebecca, wife of John Engle, Locust Grove, Pa., Mary, wife of Aaron Layton, Locust Grove, Pa., and John, Clearville, Pa; also by one half sister, and three half brothers, namely, Lizzie Smith, wife of Joseph Smith of Northcraft; Elisha Smith of Robinsonville; Will Smith of Keyser, W. Va., and Dennis Smith of Virginia; also by 44 grandchildren and 11 great grandchildren. (newspaper clipping)

Is Levi your ancestor? Please don't go away!

ask our community of genealogists a question.
Sponsored Search by Ancestry.com
DNA Connections
It may be possible to confirm family relationships with Levi by comparing test results with other carriers of his Y-chromosome or his mother's mitochondrial DNA. However, there are no known yDNA or mtDNA test-takers in his direct paternal or maternal line. It is likely that these autosomal DNA test-takers will share DNA with Levi: 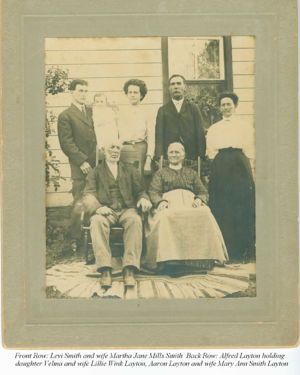 I found that there are two Levi Smith's under Rev. John Smith. They should be merged since they represent the same person. I am not on the trusted list so you three will have to collaborate to complete the merge. Thanks, Nikki Byer

I found that there are two Levi Smith's under Rev. John Smith. They should be merged since they represent the same person. I am not on the trusted list so you three will have to collaborate to complete the merge. Thanks, Nikki Byer

Levi is 18 degrees from Peter Roberts, 14 degrees from Emma Smith and 13 degrees from Henry VIII of England on our single family tree. Login to find your connection.