Assistant President and Patriarch of The Church of Jesus Christ of Latter-day Saints. Killed in Carthage with Joseph Smith. Before they were killed Joseph ordained Hyrum to succeed as President and pleaded with him to flee to the Rocky Mountains away from the mobs. As the Carthage mob attacked the jail a bullet broke through the door hitting Hyrum in the face, while a second bullet hit him in the back from the window. He fell to the floor crying, "I am a dead man!" He bled to death in Joseph's arms, just moments before his own death.

Sponsored Search by Ancestry.com
DNA Connections
It may be possible to confirm family relationships with Hyrum by comparing test results with other carriers of his Y-chromosome or his mother's mitochondrial DNA. However, there are no known yDNA or mtDNA test-takers in his direct paternal or maternal line. It is likely that these autosomal DNA test-takers will share some percentage of DNA with Hyrum: 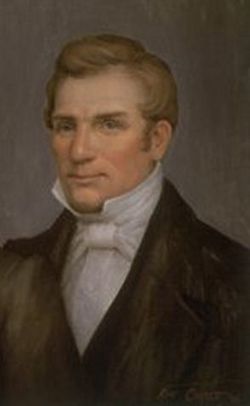 Philip Smith
You may have missed the proposed merge  it is on the bottom left of the profile. Thank you.
posted Oct 02, 2013 by Philip Smith