OHN ADAM SMITH The subject of this notice was born in Virginia May 3, 1800 and died at the residence of his son, Buchanan Smith, near Chico, July 6, 1889. Another veteran has fallen from the ranks of King Immanuel, but gone to answer to roll call in the skies. For more than half a century John A. Smith was an active member of the Methodist Episcopal Church, South and was faithful to death. What a record! Brother Smith with his family moved to Sonoma County, California in 1863, from thence he moved to Hollister, where he resided for many years. Here he was called to give up his faithful companion, who had for more than half a century borne with him the burdens of life. She died in 1877, since which time and for four years previous Brother Smith made his home with his son and daughter-in-law, Buchanan and Lizzie Smith. For twelve years he had been almost entirely blind, and was a geat care to Sister Lizzie; but she was ever faithful to her charge, and with the devotion of a noble daughter, she with willing hands and loving heart administered to his every necessity. "She hath done what she could,"and God will doubtless give the reward. Brother Smith was the father of eleven children, eight of whom survive him, viz: Buchanan Smith, Lewis C. Smith, Isaac Smith, James H. Smith John C. Smith, Elizabeth Evans, Jane Baker, and Carrie Hetherington. These with many other friends mourn their loss, yet rejoice in his deliverance from pain and affliction, in that land where the eye-sight never grows dim and the inhabitants never grow old. Until the resurrection morn, we say Father farewell. A.R. Reams - Methodist Episcopal Church News. 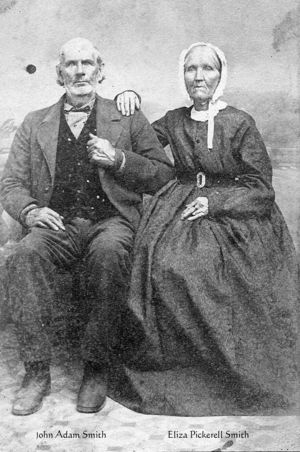