Abigail (Smith) Adams was a part of the Civil Rights Movement.

1) Throughout President John Adams’ career, his wife, Abigail Adams, served as an unofficial adviser to him, and their letters show him seeking her counsel on many issues, including his presidential aspirations. Adams remained a supportive spouse and confidante after her husband became the president in 1797, and her eldest son, John Quincy, would become president 7 years after her death in 1825.

Adams's life is one of the most documented of the first ladies: she is remembered for the many letters she wrote to her husband while he stayed in Philadelphia, Pennsylvania, during the Continental Congresses. John frequently sought the advice of Abigail on many matters, and their letters are filled with intellectual discussions on government and politics. The letters serve as eyewitness accounts of the American Revolutionary War home front.

Abigail Adams was born at the North Parish Congregational Church in Weymouth, Massachusetts, to The Reverend William Smith (1707-1783) and Elizabeth (née Quincy) Smith. On her mother's side she was descended from the Quincy family, a well-known political family in the Massachusetts colony. Through her mother she was a cousin of Dorothy Quincy, wife of John Hancock. Adams was also the great-granddaughter of The Reverend John Norton, founding pastor of Old Ship Church in Hingham, Massachusetts, the only remaining 17th-century Puritan meetinghouse in Massachusetts.

As with several of her ancestors, Adams's father was a liberal Congregationalist minister: a leader in a Yankee society that held its clergy in high esteem. Smith did not focus his preaching on predestination or original sin; instead he emphasized the importance of reason and morality. Adams was a sickly child and was not considered healthy enough for formal schooling. Although she did not receive a formal education, her mother taught her and her sisters Mary (1739–1811) and Elizabeth (1742–1816, known as Betsy) to read, write and cipher; her father's, uncle's and grandfather's large libraries enabled the sisters to study English and French literature. As an intellectually open-minded woman for her day, Adams' ideas on women's rights and government would eventually play a major role, albeit indirectly, in the founding of the United States. She became one of the most erudite women ever to serve as First Lady.

As third cousins, Abigail and John had known each other since they were children. In 1762, John accompanied his friend Richard Cranch to the Smith household. Cranch was engaged to Adams' older sister, Mary. John was quickly attracted to the petite, shy, 17-year-old brunette who was forever bent over some book. He was surprised to learn she knew so much about poetry, philosophy and politics, considered unusual for a woman at the time.

Although Adams' father approved of the match, her mother was appalled that her daughter would marry a country lawyer whose manners still reeked of the farm, but eventually she gave in. The couple married on 25th October 1764, five days before John's 29th birthday, in the Smiths' home in Weymouth. Then Rev. Smith (the bride's father) performed the nuptials.

After the reception, the couple mounted a single horse and rode off to their new home, the small cottage and farm John had inherited from his father in Braintree, Massachusetts. Later they moved to Boston, where his law practice expanded.

Adams was responsible for family and farm when her husband was on his long trips. "Alas!", she wrote in December 1773, "How many snow banks divide thee and me." She raised her two younger sons throughout John's prolonged absences. She also raised her elder grandchildren, including George Washington Adams and a younger John Adams, while John Quincy Adams was minister to Russia. Her child rearing style included relentless and continual reminders of what the children owed to virtue and the Adams tradition.

When John was elected President of the United States, Abigail continued a formal pattern of entertaining. With the removal of the capital to Washington in 1800, she became the first First Lady to preside over the White House, or President's House as it was then known. The city was wilderness, the President's House far from completion. She found the unfinished mansion in Washington "habitable" and the location "beautiful"; but she complained that, despite the thick woods nearby, she could find no one willing to chop and haul firewood for the First Family. Adams' health, never robust, suffered in Washington. She took an active role in politics and policy, unlike the quiet presence of Martha Washington. She was so politically active, her political opponents came to refer to her as "Mrs. President".

After John's defeat in his presidential re-election campaign, the family retired to Quincy in 1800. Abigail followed her son's political career earnestly, as her letters to her contemporaries show. In later years, she renewed correspondence with Thomas Jefferson, whose political opposition to her husband had hurt her deeply.

Abigail and John's marriage is well documented through their correspondence and other writings. Letters exchanged throughout John's political obligations indicate his trust in Abigail's knowledge was sincere. "She could quote poetry more readily than could John Adams," states McCullogh. Their correspondence illuminated their mutual emotional and intellectual respect. John often excused himself to Abigail for his "vanity," exposing his need for her approval.

Adams died on 28th October 1818, of typhoid fever. She is buried beside her husband in a crypt located in the United First Parish Church (also known as the Church of the Presidents) in Quincy, Massachusetts. She was 73 years old, exactly two weeks shy of her 74th birthday

Sponsored Search by Ancestry.com
DNA Connections
It may be possible to confirm family relationships with Abigail by comparing test results with other carriers of her mitochondrial DNA. However, there are no known mtDNA test-takers in her direct maternal line. It is likely that these autosomal DNA test-takers will share some percentage of DNA with Abigail: 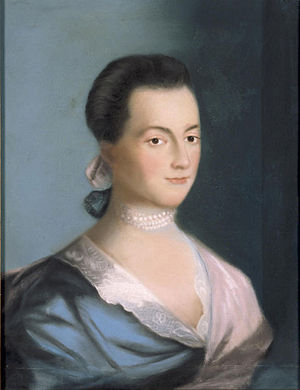 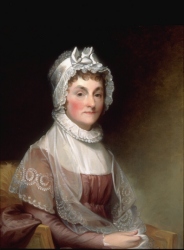 Robin Lee
Smith-163270 and Smith-69 appear to represent the same person because: dates and family are the same, match was incorrectly rejected.
posted Jul 19, 2018 by Robin Lee

Marj Adams
Smith-153986 and Smith-69 appear to represent the same person because: both wife of Pres Adams
posted Mar 27, 2018 by Marj Adams

Lisa (Kelsey) Murphy
In May 1775, a month after the shots rang out at Lexington and Concord, John was away helping with the government and Abigail opened up her house to shelter Colonial Soldiers. The barn and attic turned into bedrooms and even the kitchen floor was used to rest up. Spoons were melted in her fireplace to make ammunition. At that time, women were considered under their husband's identity. She thought this was wrong and fought for women's rights as well as slaves' rights. She was very bold in her statements and fight for equal rights. She is quoted as saying "If we mean to have Heroes, Statesmen and Philosophers, we ...
posted Sep 16, 2017 by Lisa (Kelsey) Murphy

Gail Smith
Since such an integral part of our North American United States heritage, wouldn't it be wonderful to know more of her siblings and descendencies? :)
posted May 20, 2015 by Gail Smith