Mary Pickford won the 1928/29 Academy Award for Best Actress
Mary Pickford was a Canadian-American motion picture actress, co-founder of the film studio United Artists and one of the original 36 founders of the Academy of Motion Picture Arts and Sciences. Known as "America's Sweetheart", "Little Mary" and the "girl with the curls", she was one of the Canadian pioneers in early Hollywood and a significant figure in the development of film acting. In consideration of her contributions to American cinema, the American Film Institute named Pickford 24th among the greatest female stars of all time.

Due to thrift, Gladys spent little time in school as a child. Her mother, Charlotte, having worked as a seamstress while separated from her husband, began taking in boarders after his death. One of these was a theatrical stage manager. At the manager's suggestion, Gladys (age 7) was given two small roles, one as a boy and the other as a girl, in a stock company production of The Silver King at Toronto's Princess Theatre. She subsequently acted in many melodramas with Toronto's Valentine Company, finally playing the major child role in their version of "The Silver King" and capping her short career with the starring role of Little Eva in their production of Uncle Tom's Cabin. Charlotte was moved into the role of stage manager for her children, which she remained in until her death in 1927.[5]

At the time of the 1901 Canada Census, Lottie, Gladys, Lottie, and John Smith were listed as living in Toronto, along with Lottie's sister, Lizzie Watson, and their mother, Kathleen Hennessy[6].

By the early 1900s, theatre had become a family enterprise. Mary finally landed a supporting role in a 1907 Broadway play, The Warrens of Virginia. David Belasco, the producer of the play, insisted that Gladys Smith assume the stage name Mary Pickford.[5]

Pickford said, "I played scrubwomen and secretaries and women of all nationalities ... I decided that if I could get into as many pictures as possible, I'd become known, and there would be a demand for my work." She appeared in 51 films in 1909 – almost one a week.[5]

By 1916, only Charlie Chaplin, who reportedly had a similarly spellbinding pull with critics and the audience, slightly surpassed Pickford's popularity. Each enjoyed a level of fame far exceeding that of other actors. Throughout the 1910s and 1920s, Pickford was believed to be the most famous woman in the world, or, as a silent-film journalist described her, "the best known woman who has ever lived, the woman who was known to more people and loved by more people than any other woman that has been in all history." The now-Pickfords were all living together in Los Angeles when the 1920 US Census was taken, Charlotte still the head of the household, with her two actress daughters and one granddaughter.[7]

Mary married first Eugene Moore in Jersey City, New Jersey in 1911. They were married 10 years, then divorced amid some controversey, which involved how she immediately married Douglas Fairbanks as soon as her divorce from Moore was final. They were deemed the "All-American Couple" and loved by fans around the world. They co-starred only once, in "The Taming of the Shrew." Douglas fell in love with Lady Sylvia Hawkes Ashley, and the Pickford-Fairbanks marriage was over.[8][9][10][11][5]

In 1930, Mary Pickford was awarded the Best Actress Oscar during the 2nd Academy Awards ceremony. Her 194th and last film, "Secrets" was released in 1932, after which she retired. She knew much of her success was built on her youth, so she decided to leave the business before the business left her.[5]

Mary's retired life was an odd one as chatelaine of her Beverly Hills estate, Pickfair, shared with her husband, Charles. From 1965 until her death, she spent most of her time in bed, subsisting on nearly a quart of whisky a day, accompanied by light meals.[5]

Mary died of a stroke on May 29, 1979 in Santa Monica, California. She is buried in Forest Lawn Memorial Park, Glendale, California.[14][5] 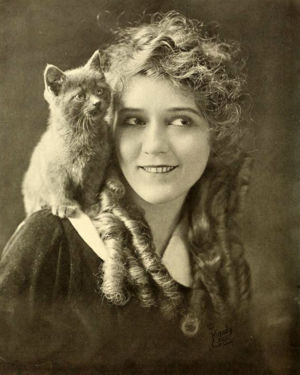 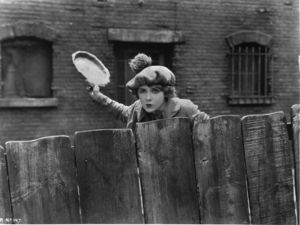 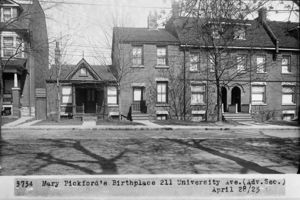 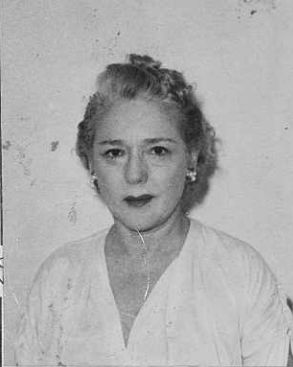