Jedediah Smith was a hunter, trapper and explorer. "He led the first overland party from the east to California. He was the first to cross the Sierra Nevada Mountains going east. He had discovered South Pass from the east and was the first to bring wagons through it to the west which encouraged the Oregon Trail wagons to follow his exploit."[2] In addition, he traveled twice the distance of Lewis and Clark, covering considerably more of the North American Continent. His maps and journals have been seen by many people. Unfortunately, he died before his maps and journals were published.[2]

Jedediah Strong Smith was born January 6, 1799, in Jericho, New York. Jericho, New York is now called Bainbridge.[2] As he grew up he learned to hunt and trap. He also learned to read and write. He carried a bible with him and had read about the Lewis and Clark Expedition.[2] His parents were Jedediah Smith and Sally Strong[3]

In 1822, while in Illinois, Smith responded to a newspaper advertisement and was hired by William Ashley, as a hunter, to join one hundred men on an expedition to trap beaver along the Missouri River. Jed sold his belongings, sent the money home to his parents in Ohio, and joined the party on a riverboat journeying up the Missouri in May 1822.[2]

In order to go up river, against the current, the men hauled the boat from the bank or wading through the river, by long ropes (cordelles). Sometimes oars or poles could be used and occasionally, if the wind was favorable, a sail could be hoisted. Their first boat, the Enterprise, sank about 300 miles up the river, and another had to be sent for. They finally arrived at their small fort on the Yellowstone River in October.[2]The distance is about 1200 miles and takes approximately 17 hours by today's highways.

Ashley separated the men into groups to begin trapping the highly sought after beaver pelts. Jed's party continued up the Missouri River into what is now Montana.[2]

The territory they were in was controlled by the Blackfoot Indians, and several of the parties were attacked and their horses were stolen. Ashley had gone for more supplies, during the fall, so in June Jed was sent to find him. They met at what appeared to a be friendly Indian village. Ashley traded goods with the Arikara Indians for some of their surplus horses. Jed and a few men kept watch, overnight, from the riverbank. Just before the sun rose the indians attacked the men from within the cover of their village. The only cover Jed and his men had were their horses. Jed and his men dove into the river and swam to safety, but twelve men were killed and ten were wounded.[2]

Jed volunteered to go to the fort on the Yellowstone, and came back with reinforcements. Ashley also gathered some Sioux warriors and a U.S. Army troop. Together they were able to defeat the Arikaras, who agreed to pay for the lost horses and supplies. However, they snuck off during the night without making any payment.[2]

Ashley had to return, once again, to St. Louis to get supplies. He appointed Smith as Captain of the party. Smith led the men into the Rockies to acquire pelts. Along the Cheyenne River, a Grizzly bear attacked the party. Jed fought the bear, which ripped open his side, and viciously pawed his head mostly tearing off Jed's ear. For no apparent reason the bear bolted into the woods. Jed was able to tell the men to clean his wounds and sew them up as well as they could. He healed quickly and was able to resume checking traps, although he did carry awful scars for the rest of his life.[2]

Jedediah and his men wintered in Wyoming, staying with a tribe of Crows, who told them about a pass through the Rockies, to the southwest. After tramping through snow, and food and water deprivation, the company located a broad level pass, which became known as the South Pass. It served as passage through the Rocky Mountains for the Oregon, California, and Mormon Trails.[2]

During the spring, the men continued to trap. In June, Jed returned to the fort to report and get supplies. Ashley's partner decided to quit, and Jed took his place. Within the year, Ashley also quit and sold the company to Jed and two men, William Sublette and David Jackson. The men divided the duties of the company. Jed's job was to search for new beaver streams in the West. In August, 1826, Jed and seventeen trappers left on a two year long trip, that would contribute to the opening of California and Oregon for trade and later settlers.[2]

Leaving the Great Salt Lake, traveling along the Green River, the group crossed the Colorado River and headed into the Mohave Desert. Thirsty and blistered, they arrived on the far edge of the Mojave, traveled over the ridge and into the San Bernadino Valley, the first white men to travel into California overland from the United States.[2]

California was under the rule of Mexico in 1826, and the government feared Americans traveling overland into California would eventually overwhelm them. They immediately ordered Jed and his party back where they came from. Undaunted, Jed and his men pretended to leave but when out of sight went north instead. They continued north through the mild California winter. In the spring, they had a good catch of furs, but were once again running low on supplies. Jed and two men headed across the mountains into the unknown lands of Nevada, where once again they were hampered by deep snows, and lack of food. Having crossed the mountains, they were again confronted by desert (the Great Salt Desert). One man became too weak to continue. Jed and the other man forged on two more miles. When they finally reached water they were able to return and revive their companion. In July 1827, they finally reached the safety of the Green River camp.[2]

After resting ten days, they began a return trip to California with eighteen men and supplies. Jed decided to take the southern route once again. Reaching the Colorado River, they met with hostile indians, were attacked and lost almost half their men. The ten survivors, gathered what they could and continued. Once again they had to struggle onward without horses, and water and very little in the way of supplies. They traveled at night to keep out of the sun. They reached the San Bernadino Valley and headed northward up the Central Valley, to camp, managing to avoid Mexican settlements.[2]

Still without supplies, Jed headed to Mission San Jose, where he was sent to Monterey and arrested. Americans living in Monterey vouched for him and promised he would leave Mexican territory. Jed was able to return to Mission San Jose, purchase horses and supplies and left headed north to the Great Valley.[2]

On this trip, due to flooding in the valley, Jedediah and his party headed up the wild rugged western coast into Oregon. Near the Umpqua River, a member of the Kelawatset tribe took an ax. Jed had him captured and whipped in order to teach him not to steal. The next day, when Jed and two others were hunting, the Indians exacted revenge, destroyed the camp, took the horses, supplies, fur pelts and killed all but one man, who pretended to be dead.[2]

The four survivors were able to travel to the British Hudson's Bay Fur Company at Fort Vancouver on the Columbia River. From there Jed and his men returned to the Green River Camp.[2]

During the following year, Jed trapped along the Bighorn Basin in Wyoming to the Musselshell River in Montana. With a successful year behind him, Jed sold his interest in the company, and returned to St. Louis[2].

Jed's brothers joined him in St. Louis. they wanted to start a trading business and Jed helped them by leading a wagon train of goods headed for California. On the Santa Fe Trail in 1831, the wagons became stuck in a stretch of sandy hills and desert. Jed rode southwest in search of water. His friends never saw him again. Mexican traders, in Santa Fe, later told the story of Jed's death. Jed was scooping water from a small water hole and was discovered by unfriendly Comanche Indians. After trying to make friends, Jedidiah shot the chief and was promptly killed by a Comanche lance in his back.[2]

Is Jedediah your ancestor? Please don't go away!

ask our community of genealogists a question.
Sponsored Search by Ancestry.com
DNA Connections
It may be possible to confirm family relationships with Jedediah by comparing test results with other carriers of his ancestors' Y-chromosome or mitochondrial DNA. Y-chromosome DNA test-takers in his direct paternal line on WikiTree: It is likely that these autosomal DNA test-takers will share some percentage of DNA with Jedediah: 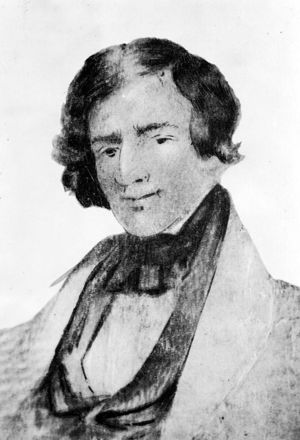 Jedediah Smith and Eren Hatton are both descendants of John Stafford.