It is important to many to solve the mystery of the parentage of Rachel Smith. We know from her burial stone in the Port Royal Cemetery, Port Rowan that she was born in 1798 and died in 1839, Her marriage to Henry Becker in 1818 is recorded in Ontario Marriages 1801 to 1928. The births of all her children were duly recorded. In some of the family trees on Ancestry.com and forwarded onto Wikitree, William Smith, the son of Abraham who married Jane Barber is shown as the father of Rachel. It is highly unlikely that Jane Barber born in 1794 is the mother of the Rachel Smith born 1798 as Jane would have been only four years old at the time. I can find no sources for Jane's marriage to William Barber except in unsourced family histories. I have removed Jane and William as the parents of Rachel and caution should be taken in relying on barber-1909. There are many of us, including myself, who would like the Rachel Smith who married Henry Becker to be descended from Abraham Smith as it would give us UE status. But unless there is an error in Jane or Rachel's birth dates it seems impossible for Rachel to be Williams, daughter.

I have been researching all the Smith's who were living in the area during the relevant period of time trying to find the parents of Henry Becker's wife Rachel Smith. So far I have been unsuccessful. Abraham's other son Issac could have had a daughter of the right age but I cannot find out who his children were.

Jessie was also a possible candidate as he had 12 children. I have pretty much eliminated him as I think I have found the names of the 12 children and there is no Rachel among them. Also, he would have been a little young to have been married and had a child by 1798. But he did have a son Benjamin in 1803 so it is still possible I am including here information about both Jessie and Isaac which may assist others to follow up on either one as a possible parent of Rachel. Jessie Smith Grant of Land -lot 17 Concession5, Charlotteville, Norfolk County. Jessie was born 1780 and died 1855 in Walker Twp. Kent Co. Michigan. Jessie moved to Lot #14, Concession 3, Bayham, Twp, Elgin Co. in 1829-10-03. Jessie and his second wife Elizabeth Fairchild who he married 24 of May, 1811 in Charlotteville, Norfolk County sold the Bayham farm. In 1836. They moved to Walker Twp. on the Grand River, Kent Co. Michigan. In the land records of Walker Twp, www.imagesofmichigan.com/early-settlers-of-walker-michigan the following people are listed as early purchasers of land.

Jessie Smith appears to have been the only settler in Walker Twp. with the last name Smith who was of the right age to have children of the right age to marry on the dates given. It is reasonable to assume that they are all Jessie's children. The names of Jessie Children appear to be: Benjamin B-1803, Daniel, Issac B. 1813 , Mary, Ann. Hannah, John, Elizabeth, Lucy, Loranda, Rosannie,

Also Othniell Smith had a daughter Rachel born in 1796 who is I think a possible candidate but she supposedly married John Boughner. There is no source material for this marriage either and the ages given in the famiily trees for their children make no sense as Rachel would have been only 11 years old when their first child was born. As this claim would give Boughner decendents EA status it is quite suspect as well. This leaves two Rachel Smith's direct descendents of EU Smith's flapping in the wind. It may take DNA testing to solve this mystery. The Othneil Smith line has already done DNA testing so it would be easy for anyone thinking they are related to find out for sure. This information is given by Susan Wallace ( nee Gunn) Stearns, Killmaster, Stacy, Rice, Becker

UPDATE Othniel Smith's son Joseph born 1779 and died 1812 may be the father of Rachel Smith. I do not have a source or date for his marriage to Sarah Sally Beamer. But his will names his wife Sarah, his sons John, Levi and Andrew and his daughters Charlotte, Rachel, Anna and Jewly. Given that when Joseph died he was only 33 and had already fathered 7 children it is not unreasonable to assume that he was married by 1798 when Rachel Smith was born.

In the Canadian Census of 1842 I have been able to locate the two sons John and Levi and the daughter Charlotte. I have not found Rachel or Anna and it is likely that they were married by this time.I If the missing Rachel is his daughter she would have married just 6 years after his death which would explain why we have not other records of her as Rachel Smith.

Children of Othniel Smith 1. Joseph Smith: born 1779 in New Jersey. His will bears the date of June 5, 1812, names his wife, Sarah, and in it he bequeathed his sons, John and Levi, the whole of the home farm being part of Lot 17 in the Gore of Woodhouse, and to Andrew, the one half of Lot 15, Concession 12 in Walpole, Haldimond Co. The will also names his daughters Charlotte, Rachel, Anna and Jewly .

2. John Smith: born 1779 in New Jersey married Sarah Pettit. His will dated May 29, 1813 names his wife, Sarah, and bequeaths unto his sons, Joseph and Garret the whole of the home farm being Lot 18 in the Gore of Woodhouse,; unto Jonathan P. and Isaac Smith the one half of Lot 15 in Woodhouse. Also mentioned are his son, Othniel and daughter, Caty P Smith.

( There were no records to indicate that the brothers were killed as a result of the War of 1812. Owens indicated that a typhus epidemic had swept through the settlement that year and Dr. R. Pomroy of Burford was present when Joseph died. It is not known were they are burried.)

Is Rachel your ancestor? Please don't go away!

ask our community of genealogists a question.
Sponsored Search by Ancestry.com
DNA Connections
It may be possible to confirm family relationships with Rachel by comparing test results with other carriers of her mitochondrial DNA. However, there are no known mtDNA test-takers in her direct maternal line. It is likely that these autosomal DNA test-takers will share DNA with Rachel: 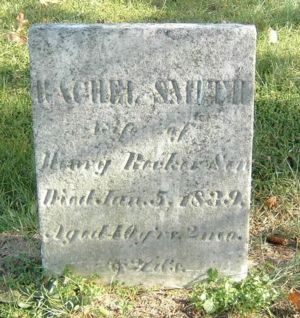 Leave a message for others who see this profile.
There are no comments yet.
Login to post a comment.
Susan (Gunn) Wallace
It means United Empire Loyalist and refers to Canadians who lived in the US and remained loyal to the crown during the American revolution. As a result they lost their lands and property. When they moved to Canada leaving everything behind they received a grant of land from the crown. Direct descendents of those people keep that status and can write EU after their names.
posted Apr 05, 2015 by Susan (Gunn) Wallace