Please do not merge him with any of these other men. Please read the sources cited below to distinguish him from others of the same name.

We do not know the birth date or origins of this Thomas Smith of Ipswitch but he must have been born by about 1610 based on the birth of his first grandchild. Court records seem to indicate he was born either about 1606 or 1612 (see below). He and his wife, Joanah had two daughters:

Court Records Before His Death 1680

Court Records from shortly before his death at his daughter's house in Bradford clearly elucidate his relationship to the Kimball family:

"Thomas Smith, sr., and his wife being aged and impotent and unable to help and provide for themselves, said Smith came into court and gave up to the electmen of Ipswich the following estate: three cows and one yearling, three acres of land at Muddy river, a bill of three pounds, six shillings of Puls if er's and fifteen pounds due from Thomas Dow, about eleven pounds due him from Aron Pengry, sr., and all his household goods . . . provided the town maintain them as long as they live. Capt. Shuball Walker, one of the selectmen of Bradford, presented a writing to the court in behalf of the town under the hands of the selectmen of Ipswich, informing the court that Mr. Thomas Smith and his wife of Ipswich had come into their town contrary to order, and having warned the persons who entertained them not to do it, likewise to said Smith to depart, yet they abide in the town still and liable to be a charge to the said town, court ordered that the caution be entered."[15]

"November 18, 1680 Richard and Benjamin Kimball of Bradford did covenant to and with the selectmen of Ipswich that they would take Thomas Smith and his wife to Bradford to the house of Mary Kimball the widow of Thomas Kimball and provide their meate, drink, washing, lodging, clothes and attendance with all things necessary for persons in such a condition for the space of one year beginning at the date hereof, the price for a year to be £25. December 8, 1681 agreed with Richard Kimball of Bradford to allow unto him further keeping and providing for his grandfather Thomas Smith for the year ensuing £13."[16]

"Richard Kemball presenting an Inventory of ye Estate of Thomas Smith disceased: where unto he hath given oath to the truth thereof & If more be found, he will add the same. Pour of Administration to sd Estate Is granted unto the sd Mary & Richard Kemball In court held at Ipswich 28 of March 1682 This is a true Inventory of the Estate of Mr Thomas Smith of Ipswich Deceased Aprised:" etc. His estate Included a bed, carsay & searg, pudder, scellets and pots, trammell and friingpan, table and chist, it one axe, it one saw. He was due debts from Thomas Dow, Pulsifer and Aaron Pengrave. His estate owed debts to Mr Rogers, John Appleton, Richard Kimball and Nath Russ. The Appraisal was signed by Richard Hall and Samuel Hazeltine (and in-law of his daughter Mary).[17] 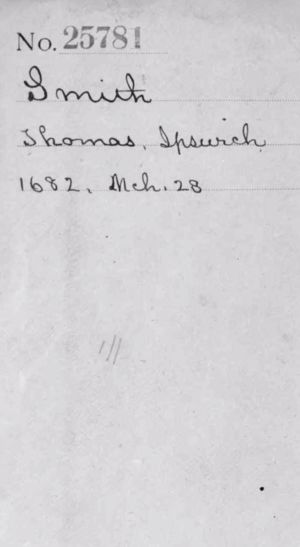 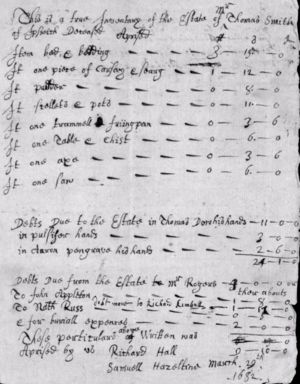 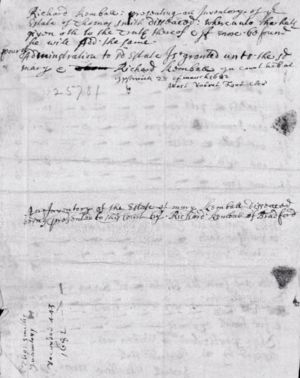 Richard Bump
Please consider revising daughter: Sarah Smiths information based on the attached daughter. The marriage to Samuel Loomas has been disproven. See American Genealogist V79(2004) pg. 274-276 by Janna Bennington Larson. The birthdate I use for Sarah is an estimate since it even appears Larson wasn't totally date aware
posted May 23, 2018 by Richard Bump