Major General Sir Nevill Maskelyne Smyth VC KCB was a senior officer in the British and Australian Armies and a recipient of the Victoria Cross, the highest award for gallantry in the face of the enemy that can be awarded to British and Commonwealth forces.

Born Nevill Maskelyne Smyth on 14th August 1868 in Westminster St Margaret, Middlesex, England, he was the son of Sir Warington Wilkinson Smyth, a noted geologist, and Story Maskelyne. He was a grandson of Admiral William Henry Smyth.[1] His father's sister, Henrietta Grace Powell, was the mother of Lord Robert Baden-Powell, the founder of the Scout Movement.

After completing his formal education at Westminster School, Smyth entered the Royal Military College, Sandhurst, graduating in 1888. He was posted to the Queen's Bays (2nd Dragoon Guards) in India as a Second Lieutenant. After his regiment was posted to Egypt, he was Mentioned in Despatches and awarded the Order of the Medjidieh, Fourth Class. During the Battle of Omdurman, though severely speared through the arm, saved two war correspondents from imminent death. This action saw him awarded the Victoria Cross; the citation for which was gazetted on 15th November 1898, and read:

"War Office, November 15, 1898.
THE Queen has been graciously pleased to signify Her intention to confer the decoration of the Victoria Cross on the undermentioned Officers and Private Soldier, whose claims have been submitted for Her Majesty's approval, for their conspicuous bravery during the recent operations in the Soudan, [sic] as recorded against their names:—

2nd Dragoon Guards, Captain Nevill Maskelyne Smyth
At the Battle of Khartum on 2 September 1898, Captain Smyth galloped forward and attacked an arab who had run amok among some camp followers. Captain Smyth received the Arab's charge, and killed him, being wounded with a spear in the arm whilst in so doing. He thus saved the life of at least one of the Camp Followers."[2] He was Mentioned in Despatches on two further occasions and then awarded the Order of Osmanieh, Fourth Class in 1900.

Smyth rejoined the Queens Bays for active service in South Africa in the Second Boer War. He was seconded to the Egyptian Army in 1912, as commandant of the Khartoum district where he was active in combating the slave-trade.

Nevill Smyth VC KCB is an Anzac who served in World War One.

Smyth was dispatched to Gallipoli by Lord Kitchener, arriving in May 1915. He commanded the 1st Australian Infantry Brigade as a temporary Brigadier General at the Battle of Lone Pine and was one of the last officers to leave the peninsula. He was appointed Companion of the Order of the Bath (CB) and received a further Mention in Despatches. Smyth led the brigade in France in 1916, and given command of the 2nd Australian Division as a temporary Major General. He was Mentioned in Despatches twice more (eleven times during his military career!) and was made substantive as Major General on 1st January 1918 as a "reward for distinguished service in the field".

He was promoted Knight Commander of the Order of the Bath (KCB) in the 1919 King's Birthday Honours. He was also awarded the Belgian Croix de Guerre and the French Légion d'honneur by their respective governments.

Smyth retired from the British Army on 5th July 1924. He migrated to Australia and purchased a merino sheep station, Kongbool near Balmoral, in the state's western districts, in 1925 with his wife and three children. Asked his reason for 'so odd a move', Smyth responded that he regarded Australians as the finest troops with whom he had ever served, and he wanted to live among them in their country.

He passed away on 21st July 1941 at Balmoral and was buried in Balmoral Cemetery.[4] One of his sons, Dacre Smyth, followed a military career in the Royal Australian Navy from 1940 to 1978, rising to Commodore.

Is Nevill your ancestor? Please don't go away!

ask our community of genealogists a question.
Sponsored Search by Ancestry.com
DNA
No known carriers of Nevill's DNA have taken a DNA test. 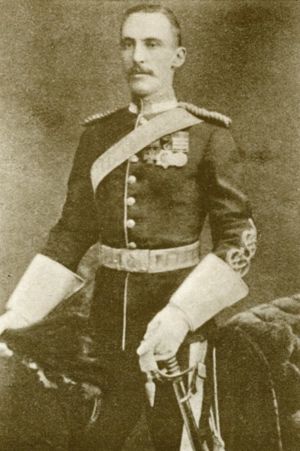