Admiral William Henry Smyth KFM DCL FRS FRAS FRGS FSA (1788-1865) was a Royal Navy officer, hydrographer, astronomer, and numismatist who is noted for his involvement in learned societies, for his navigational and star charts, and for a wide range of publications and translations.

He was the only son of Joseph Smyth, an American Loyalist from New Jersey, and Caroline Pilkington, the Irish daughter of John Carteret Pilkington. Never having known his father, he grew up with a half-brother Augustus Earle and a half-sister Phoebe Earle. At the age of 14 he ran away from home to join a merchant ship, later bought by the Royal Navy, and served in the Indian, Pacific and Atlantic oceans during the Napoleonic Wars. When peace came in 1815, he was a Commander with command of a vessel in the Mediterranean, working until 1824 at mapping the waters and coasts of that sea. From then on, he pursued a life of literary and scientific pursuits until his death in 1865.

At Messina in 1815, when both were aged 27, he married Eliza Anne, only child of Thomas Warington, the British consul in Naples, and his first wife Anne, widow of Lewis Bradshaw Peirson and daughter of William Robinson. They had eleven children, five of whom either achieved prominence or married notable spouses: Sir Warington Wilkinson Smyth (1817-1890), Charles Piazzi Smyth (1819-1900), who married Jessie Duncan; Henrietta Grace Smyth (1824-1914), who married Baden Powell and was mother of nine, including Robert Baden-Powell, 1st Baron Baden-Powell; Sir Henry Augustus Smyth (1825-1906); and Georgiana Rosetta Smyth (1835-1923), who married Sir William Henry Flower and had seven children, including Stanley Smyth Flower. 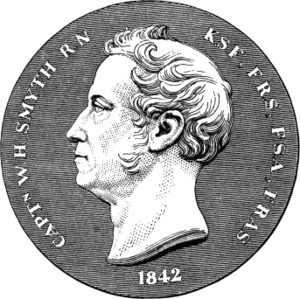 William is 16 degrees from Donald Howard, 13 degrees from Julia Howe and 12 degrees from Henry VIII of England on our single family tree. Login to find your connection.