Wife of William Good — married after 1686 in Massachusetts Bay

Sarah (Solart) Good was executed for witchcraft in witch trials

Sarah Solart was born to prosperous innkeeper John Solart and his wife Elizabeth, about 1653. [1]

Sarah's father committed suicide when Sarah was a young woman: “Report of a jury of inquest... appointed upon the sudden death of John Soolart of Wenham, found him accessory to his own death by drowning himself....”[2]

Sarah next married William Good, but the couple lost their property in lawsuits related to her first husband's debts. By the time of the witchcraft outbreak, they were homeless, poverty-stricken, and dependent on others for sustenance.”[1] “Known as a pipe-smoking, muttering beggar, Good would go door-to-door with her 4-year-old daughter Dorothy in tow.”[4]

On 1 Mar 1692, Colonel John Hathorne and Captain Jonathan Corwin examined her at Salem.[5] At this time, her husband bizarrely testified, “She is an enemy to all good" and she "was a witch or would be one very quickly."[7] After a second examination on 5 Mar 1692, where her husband again testified, “william Good saith that the night before his s'd wife was Examined he saw a wart or tett a little belowe her Right shoulder which he never saw before...[6] [5] They sent her to the jail in Boston on 7 Mar 1692.[5] On 29 May 1692, the Boston jailer submitted his bill,“against the country,” for “chains for Sarah Good and Sarah Osburn, 14 shillings...[5]

She was described as “a forlorn, friendless, and forsaken creature, broken down by wretchedness of conditions and ill-repute.”[5]

Her hanging was delayed because she was pregnant when arrested. She gave birth in jail to a daughter, Mercy, but the infant died there before her execution.[8]

Sarah Good never confessed her guilt, even as her four year old daughter, Dorothy, was also accused and jailed.[5]

Chief Justice William Stoughton signed her Warrant for Execution,[6] and she was hanged on 19 Jul 1692 at Proctor's Ledge, Gallows Hill, Salem, Massachusetts Bay. [5]

On the ladder, still remorseless and unyielding, she scorned Reverend Nicholas Noyes’s exhortations to confess and proclaimed,

You are a liar. I am no more a witch than you are a wizard, and if you take away my life God will give you blood to drink![5][9] 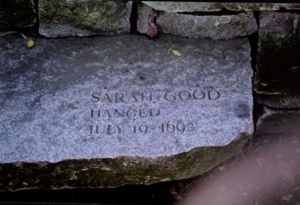 Examination of a Witch 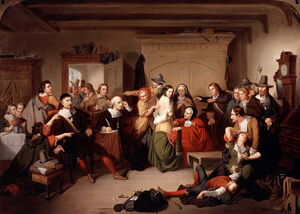 Leave a message for others who see this profile.
There are no comments yet.
Login to post a comment.
Doug Sinclair
I removed the reference to Sarah receiving nothing from her father's estate. At the 30 March 1686 session of the Essex County Quarterly Court, held at Ipswich, Ezekiel Woodward (Sarah's stepfather) showed a receipt for his transfer of three acres in "Thorndike's Meadow," part of John Solart's estate, to William Good, Sarah's husband. John Edwards, Sarah's brother-in-law, confirmed this. Records and Files of the Quarterly Courts of Essex County, Massachusetts, vol. 9 (Salem, MA: Essex Institute, 1975), 579 There are many blogs (particularly about the Salem "witches") and personal ancestry sites that say she got nothing. There was an initial lawsuit between the heirs and Woodward, who had been keeping Solart's property since he married their mother, but the story didn't end there.
posted Dec 06, 2021 by Doug Sinclair

Bob Scrivens
Thanks for putting this in the Connection Finder, Abby, I only knew of Sarah as a victim of the Witchcraft Trials, not as a distant ancestor. As I read the profile here, I couldn't help thinking two things: 1. Sarah's was a classic case of victimization of women, and 2. a victim of group that needed a scapegoat to secure cohesion. Plus, the similarities between her and "powerful" woman today (e.g. Hillary Clinton as witch)
posted Nov 15, 2021 by Bob Scrivens

Scott Hutchins
Multiple sources on Ancestry say that she was born in July, but they do not agree on the exact day.
posted Oct 31, 2021 by Scott Hutchins
Doug Sinclair
There isn't an extant birth or baptism record for Sarah. Any claims otherwise aren't based on actual records. The first child of John and Elizabeth who has a birth record was Martha in 1659, which can be found in the Wenham town records and the Essex Co. annual vital records returns. Mary, John, Joseph, Elizabeth, Sarah and Hannah were born before this.
posted Dec 06, 2021 by Doug Sinclair