Ellen Winsor Soper was born to William Soper and Sarah Lakeman in Totnes, Devon in June 1841[1]

In the 1851 census she is listed at Week Farm, Townstall, Devon with her parents and younger siblings (Winsor, Rowden, Wheaton, Edwin Day) as 9 years old [2]

Robert and Ellen had 9 children.

When Ellen Aroa died in February 1917, the Marlborough Express published the following obituary:

The late Mrs Ellen Aroa, whose death occurred at Blenheim on Friday at the age of 75 years, was an old and esteemed resident of the Awatere district. Her husband, Mr Robert Aroa, who was a well-known settler at Blind River, predeceased her by several years. The deceased lady was born at Brixton. Devonshire and arrived at Nelson with her parents when she was eleven years old, her association with the colonising days thus dating back 64 years.

She was married to Mr Aroa in the Wairau district 51 years ago, and spent some thirty years of her life at Blind River, removing about 16 years ago to Blenheim. In recent years her health had weakened, but she remained in a comparatively active condition until almost the last, death being due to heart failure. Throughout her long life her kindly and hospitable nature endeared her to many friends.

She leaves five sons and three daughters. Mr John Aroa, of Blind River, is her eldest son, and four sons are settled down in the North Island. The surviving daughters are Mrs Stirling (Kaikoura), Mrs Noel Paton (Blenheim), and Miss Aroa who is a member of the nursing profession.

She is buried with her husband at Omaka Cemetery, Blenheim, Marlborough, New Zealand [5]

ask our community of genealogists a question.
Sponsored Search by Ancestry.com
DNA Connections
It may be possible to confirm family relationships with Ellen by comparing test results with other carriers of her mitochondrial DNA. However, there are no known mtDNA test-takers in her direct maternal line. It is likely that these autosomal DNA test-takers will share DNA with Ellen: 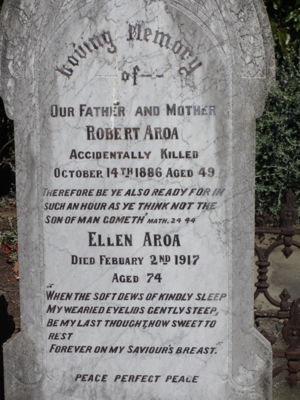