The Southworth family trace back to the de Southworths of Samlesbury Hall, County of Lancaster, England. The name was variously spelled in early English and American records, Sotherworth, Sowthworth, Southwood. Southward and in some cases in later generations it was pronounced and spelled Southard, but the original name was Southworth as in the churchyard inscriptions, County of Lancaster, where the Southworths of Samlesbury Hall (their home for more than 300 years) are buried.

William was born about 1659 in Duxbury, Plymouth Colony (now Massachusetts) and his parents were Elizabeth (Collier) and Constant Southworth who had married on 02 Nov 1637. His mother Elizabeth was the daughter of William Collier, "the richest man of the colony". His father was Constant Southworth who immigrated to New England in 1628, when but 14 years of age and was brought up under the influence of his step-father the Governor; and Constant became a man of importance in the colony.

William Southworth was first married about 1680 in Duxbury, Plymouth Colony to Rebecca Pabodie (b: 16 Oct 1660) and their children included:[1]

William Southworth married secondly on 14 Nov 1705 in Saybrook, Connecticut to the widow Martha (Kirtland or Kirkland) Blaque or Blake and their children included: 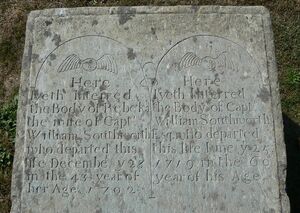 Leave a message for others who see this profile.
There are no comments yet.
Login to post a comment.
Kathryn Smith
Southworth Genealogical Research & DNA Study Project to be Conducted by the New England Historic Genealogical Society

Additional Research and Analysis Since 1992: Under Gary Boyd Roberts, The Royal Descents of 900 Immigrants to the American Colonies, Quebec, or the United States (Baltimore: Genealogical Publishing Co., 2018), 1:708-709, Mr. Roberts first acknowledges the uncertainty of Edward’s origins: “Edward Southworth, probably [emphasis added] the Leyden Pilgrim…” (p. 708). He then addresses Sue Allan’s “In Search of Separatist Edward Southworth of Leiden” 2017 online monograph https://shop.americanancestors.org/products/in-search-of-separatist-edward-southworth-of-leiden-his-genealogical-origins-uncovered?pass-through=true argument against Leyden as Edward’s correct origin as Edward’s father, Thomas Southworth of Samelsbury, Lancashire was a Protestant, while Thomas’s father, Sir John Southworth, and two of Thomas’ brothers were “sometime ardent Catholics variously imprisoned.” Comment: My understanding is that during this period, most family members tended to practice the same faith, though there can be exceptions such as perhaps Thomas followed Protestantism to avoid being imprisoned.